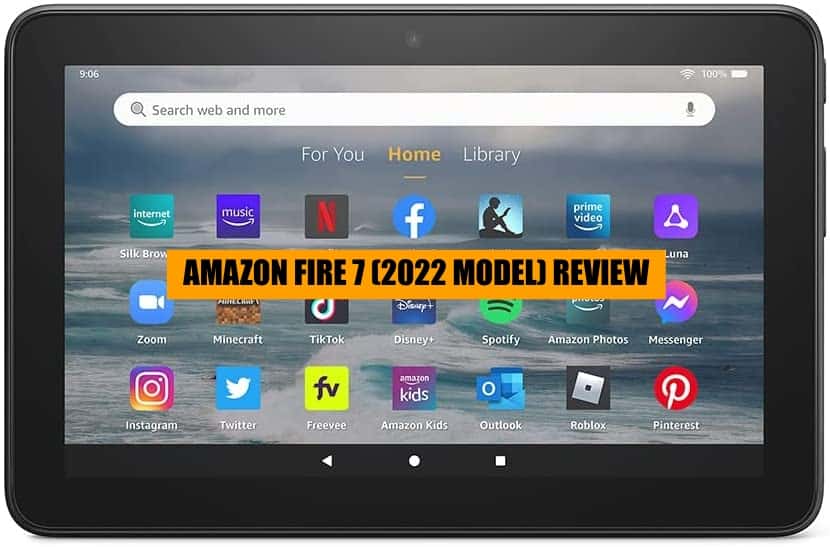 Last Updated on December 13, 2022 by Saad and Ernests Embutnieks

Amazon’s Fire lineup has long stood the test of time as being revered as the most budget-friendly option. The Amazon Fire 7 is a testament to how the company has aimed to target users who don’t want much out of their tablets. The 2022 version of the tablet is a welcome refresh, with a slightly larger display and the inclusion of a USB-C port.

The Fire 7 is one of the more interesting tablets that have graced our desk, especially with our recent triads with tablets like the Lenovo Tab M10 Plus. We’ve grown accustomed to a more premium experience.

With that said, here’s our review of the Amazon Fire 7, which is one of the best tablets under $100 and definitely the most popular 7-inch tablet on the market. 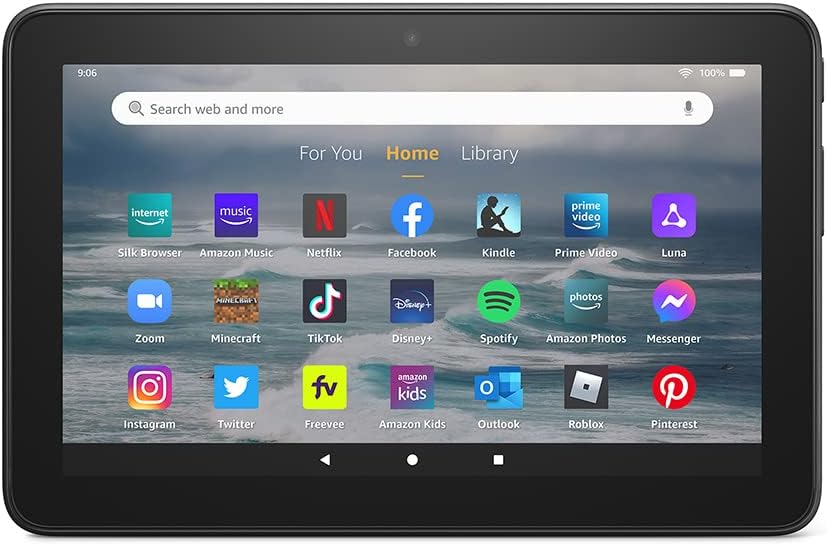 4.9
For Movies6
For Note-Taking3
For Drawing1
For Gaming5
For Reading9
For Photo-Editing1
For Video Calls6
For Web-Surfing/Social Media8

Just like any other tablet, the Amazon Fire 7 has a few pros and cons that can help in your decision-making process. Here’s a quick look at them:

Features Of The Amazon Fire 7

The Amazon Fire 7 comes with a plethora of features unique to the tablet. At this price range, it is integral to take a look at each and every component of the device to ensure that it matches your needs. Otherwise, you might be annoyed with the lack of a particular functionality that you find pivotal in your daily use.

The Fire 7 is the only tablet in the Fire lineup that does not have an HD display. However, the display is also much smaller. I find the tablet to be great for reading the news or casually surfing the web. Yes, the text could’ve been clearer, but it works for a few minutes of reading daily.

For anything more serious, though, such as watching a movie, prepare to be a bit disappointed by the small screen size and the absolutely abhorrent muted colors on many occasions if you are used to an AMOLED display or a better-quality display for that matter, it’s hard to get used to the Fire 7.

The tablet does run quite bright, though. Yes, I can’t use it in direct sunlight – but couple that with the above-average viewing angles, and multiple individuals can enjoy a movie simultaneously (given that you ignore the colors, of course.)

I really enjoyed reading on the tablet. As mentioned earlier, the text could have been a bit crisper, but the experience was great overall. You don’t really care much about colors when reading, and the brightness really helped me consume content on multiple occasions with no issues whatsoever.

The Fire 7 has a culmination of Android 11 and Fire OS 8. So, you get some of the newer features that Android 11 provides you with the latest and greatest in security and firmware updates. No Android 12 is to be seen as of yet.

But that’s not the reason why we’ve included the Software section in this particular review. You do not again have access to the Google Play Store and other Google applications right out of the box, unlike a typical Android experience.

Now, you can’t even install Google Play Store officially. You’ll have to sideload it instead. Now, this might be easy for someone who’s into tech. But, it is a point to note if you are going to be gifting this tablet to your grandpa, who might not be into bleeding-edge technology.

But, then again, for someone who isn’t into technology, they can probably fare well with the applications that Amazon forces down your throat from the get-go in the first place. Another issue is that you cannot delete Amazon-affiliated applications such as Prime Video. This can turn out to be quite annoying if you want a clutter-free experience.

One advantage, though, is that Fire OS helps the tablet run much smoother than if the device was running stock Android. So, I feel like Amazon has definitely done some optimization under the hood to ensure the device runs smoothly, even with the seemingly lackluster hardware.

You wouldn’t be surprised to find out that the Amazon Fire 7 is definitely not the strongest tablet to ever be released. In fact, the truth is far from it. The newer Fire 7 offers a modest upgrade over the previous generation – a newer 2.0 GHz MediaTek MT8168 CPU.

So, the tablet can chug through YouTube just fine. However, you will run into the occasional stutter now and then. This tablet is definitely not meant for anything that revolves around critical productivity. Don’t think about word-editing large files; video editing is simply out of the picture, and gaming simply won’t pull through for any heavier title.

Let me get one thing straight. You should definitely not be buying the Fire 7 for anything other than extremely basic tasks. If you happen to accept that – you’ll have a relatively decent experience. If you try to push the tablet too hard, you’ll end up with lag, crashes, and stutters, all in all.

The Fire 7 is equipped with a front-facing and rear-facing camera. Both of them are 2 MP shooters. Now, once you’ve heard these specifications, do I really need to say more? Well, the tablet has one of the worst cameras that I’ve ever had the displeasure of reviewing.

They produce a grainy and muddy image that resembles a flip phone (and not the Galaxy Flip, mind you.) So, if you are in the mood for an extremely dainty, ancient look, then the Fire 7 is for you. For video calls, the Fire 7 isn’t passable by the slightest. Yes, someone can see your face, but you look like a sickly ghost of yourself at the end.

When it comes to low light, you shouldn’t even try to turn on the camera. Since well, the camera provides quite a ghastly image.

Now, we’re finally graced with the inclusion of a USB-C port on this generation of the Fire 7. The box comes with a USB-A to USB-C cable, which doesn’t support any fast charging standards. In fact, you are looking at around 4 hours and 10 minutes for a full charge which definitely is on the worse end.

Who Is The Amazon Fire 7 For?

The Amazon Fire 7 is for anyone who wants an entry-level tablet to get extremely basic tasks done. These basic tasks involve light video watching, casual web browsing, and editing documents on the fly.

With the advent of cloud-based applications, most processing is off-loaded to larger servers anyways. So, the Fire 7 can probably mow through many daily tasks relatively easily. On the other hand, the tablet can’t tackle much of what you’d hope from a mid-range tablet. The Fire 7 acts as a great alternative to the Kindle. Yes, it doesn’t have an E-Ink display which means that you’ll have to go through some eyestrain. But, it is cheaper than the base version of the Kindle too.

If you are an avid video watcher, play games on your mobile phone, or just need a ton of creative applications, or need the tablet for your productivity – then the Fire 7 is definitely not for your coming.

The newer generation of the Fire 7 is a welcome upgrade over the previous generation. While we would’ve liked it if the display was focused on it, it makes sense that some caveats must be made at this very low price point. All in all, there’s no reason to opt for the older generation as there’s almost no difference in price.

Other Aspects Of The Amazon Fire 7

Is The Amazon Fire 7 Worth It?

Yes, the Amazon Fire 7 is worth it at this price point. This is because there is basically no competition for the product in this particular range. The tablet lets you chomp down most tasks, and while yes, you can’t game on the tablet for extended periods of time (or game at all in most cases), you still can use cloud-based gaming applications to get your fix.

Yes, you are semi-locked in the Amazon ecosystem. But, a few sideloads and you should be able to install and use the Google applications that you’ve grown accustomed to on any Android phone.

So, if you have a toddler who’s demanding a tablet or just want a media consumption device that gets the most basic of jobs done – the Fire 7 is an excellent pickup, and that is primarily because of its cut-throat pricing.

Trust me, I’ve had my fair share of time reviewing cheaper tablets from brands that even I haven’t heard the name of. While they may look better on paper, they definitely do not perform as well. Couple that with the fact that while the Fire 7 is a cheap product, it still is a product from Amazon. So, you end up with great customer support and service alongside the fact that you can purchase an extended accidental warranty for only a few dollars.

How Many Years Does Amazon Fire 7 Tablet Last?

The Amazon Fire 7 will last at least 3 years. You will be able to use the tablet for about 2-3 years before you run into any major lag or bottlenecks that’ll render the tablet unusable. However, this is just speculation. There’s a high chance that the tablet may just run for longer.

Is Amazon Fire 7 The Same As Kindle?

No, the Amazon Fire 7 series are full-fledged tablets, while the Kindles are e-readers. They hone different firmware and have different displays alongside them, being used for completely different use cases. Fire tablets are all-rounders, while Kindles are dedicated e-readers.

Is Fire OS Different From Android?

Fire OS is based on Android. However, it has a few restrictions and differences. For instance, Fire OS does not have access to the Google Play Store, and you’ll need to sideload a lot of common applications due to them not being available on the Amazon App Store.