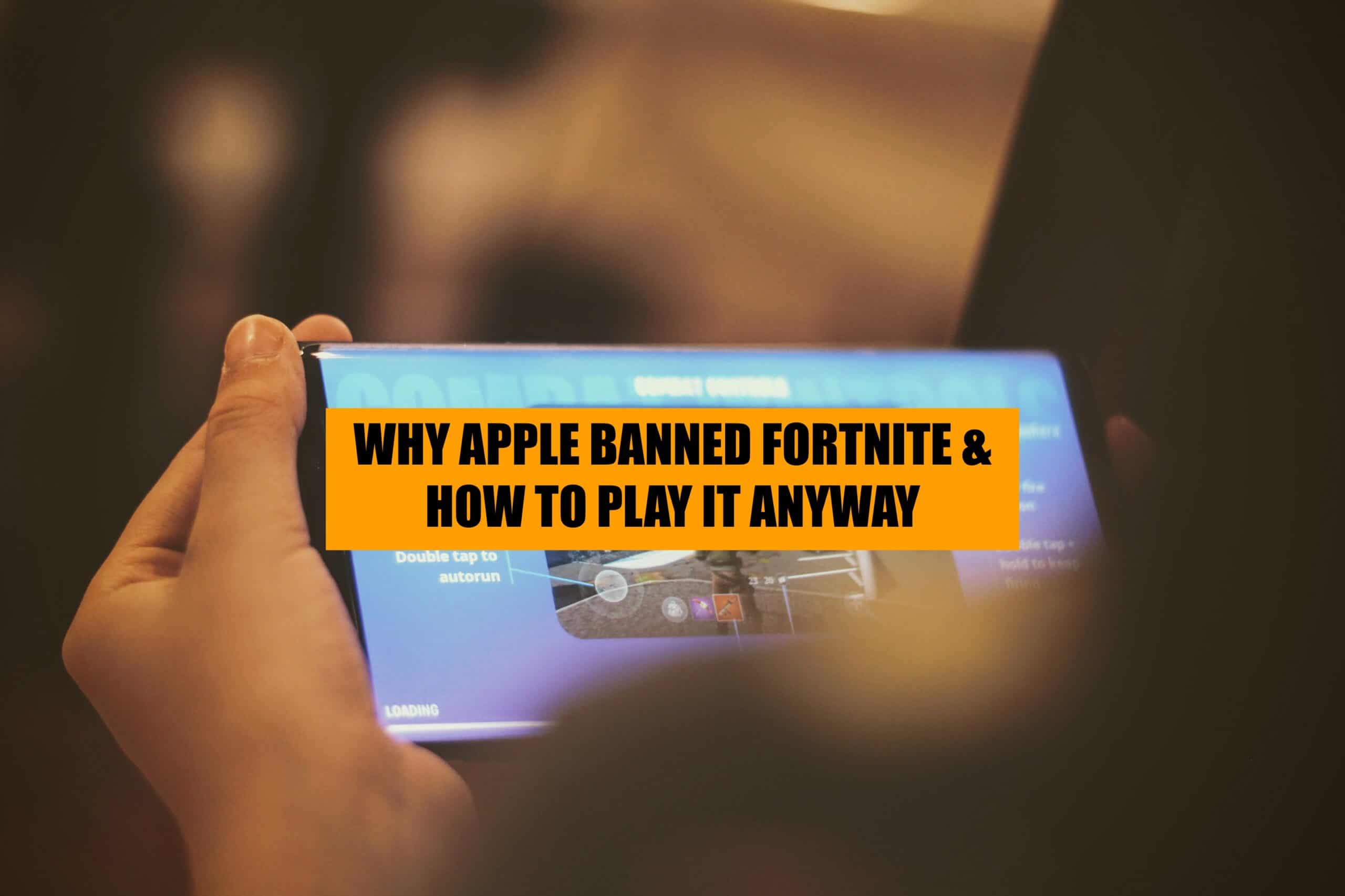 Contents hide
Why Did Apple Ban Fortnite?
Will Fortnite Be Unbanned?
How To Play Fortnite On iPhone / iPad
Conclusion

Why Apple Banned Fortnite? How To Play Fortnite On iPhone / iPad

Apple’s known to keep a tight ship. Their closed ecosystem has sparked many issues. However, their decision to ban Fortnite from the Apple Store remains the most controversial. With that said, why did Apple decide to ban Fortnite? And can you still play Fortnite on an iPhone or an iPad?

Apple decided to ban Fortnite because Epic Games, the developer of Fortnite, violated their terms and regulations by hosting their own store that bypassed Apple’s own In-App-Purchase guidelines.

In this article, we will go over the exact reasons why Apple banned Fortnite and how you can play Fortnite on your iOS device.

Why Did Apple Ban Fortnite?

The App Store is created and maintained by Apple. Millions of applications, both free and paid, are hosted on the platforms for users to go through. Some of these applications contain microtransactions, aptly referred to as In-App Purchases.

These purchases can be a small injection of coins in your favorite game or a subscription to a premium version of a VPN. In Fortnite’s case, it is the purchase of V-Bucks, their premium currency which lets you buy aesthetic skins and other items in the game.

Now, every purchase done through the Apple Store is managed by Apple. This is why Apple takes a 30% cut from every purchase made within their ecosystem. And, attempts to circumvent are deemed as in violation of their ToS (Terms of Service.)

Now, Epic, in 2020, did exactly just that. By redirecting users to a portal that let them purchase V-Bucks from their own official site, Epic could now make 100% of the money that was being paid to them instead of only 70%.

This might not seem like much, but, in the grand scheme of things, according to testimonies provided by Apple employees, Apple made over $100 million over the 30% cut from Fortnite.

Epic Games didn’t want Apple to take in more of their money and violated their terms. After filing lawsuits from multiple states, Apple eventually banned Fortnite for breaking their ToS in 2020, and the situation remains the same at the end of 2022.

This means that currently, you aren’t able to download or play Fortnite on the iPhone and iPad. And, the Macbook has an outdated version of Fortnite that is basically unplayable as well.

Apple took a stand. I think they made the right decision. Rules are rules. If you allow one big game to bypass them, then everyone will want unique rules for themselves.

That is the primary reason why they’ve decided to ban Fortnite. Even though it hurts them financially as well, they’d rather create an example out of a rather large company than worry about smaller developers following suit by creating their own portals.

Will Fortnite Be Unbanned?

No, Fortnite will not be un-banned from Apple devices in the near future. This is because Apple doesn’t want to entertain Fortnite on their App Store unless they comply with the 30% cut rule. On the other hand, Epic doesn’t feel like it’s necessary for them to adhere to their rulings. So, they’ve resorted to the court instead.

Therefore, even if the court rules in favor of Apple, Epic feels no compulsion to agree to Apple’s terms as it is their own choice as to whether they want Fortnite on the App Store or not.

To further understand, here’s a quick look at why both companies are at a standstill when it comes to Fortnite on the iPhone:

Apple devices made up less than 7% of Epic’s total revenue from purchases. In essence, they don’t make a lot from the App Store as they previously had led people to believe. In fact, projections estimated that they’d make up even lesser, about 5%, in 2020.

So, Epic has no real incentive to bend the knee to Apple. Their greatest revenue source, the PlayStation and Xbox, both at 46.8 and 27.5 percent, respectively, make up a much bigger portion of the pie.

Therefore, it’s unlikely that if Apple wins the court case and doesn’t need to revoke the 30% rule, that Epic would bring Fortnite back to iPhone. From their point of view, it simply isn’t worth it to spend all the time and investment on updating an application for an entire ecosystem only for it to bring 7 percent of their total revenue with a 30% fee slapped onto it.

However, if Apple does somehow end up revoking the cut, we’ll end up with Fortnite on the Apple Store. However, that remains a very big improbability.

Unless ordered by the court, Apple will not take away their 30% cut on the Apple Store. This is because it makes up a major chunk of their revenue. And, if Epic Games were to get away with setting up their own portal, it would establish other developers to do the same.

Other developers, such as Google, have reduced the cuts they take on their App Store. And, even though Apple has chopped off its rates for smaller developers who make under $1 million to 15%, developers are still resentful of the overall idea.

Whether we like it or not, Apple does compromise of a valuable market. Their 30% cut is justified by the amount they spend on upkeep, hosting applications, and creating a vibrant ecosystem. While that’s partially true for the early years of the Apple Store, the behemoth now rakes in a pretty profit that’s hard to justify.

How To Play Fortnite On iPhone / iPad

Despite the ban, you can still pay for Fortnite on your iPhone or your iPad in 2022. Yes, you cannot download the application natively. However, there are a few methods you can utilize to still be able to play the game.

Xbox Cloud Gaming and GeForce Now let you play Fortnite on your iPhone or iPad. Essentially, they establish connections with a server closest to you that houses the hardware to run Fortnite. Once established, video is streamed to your device, with you being able to send in inputs as well.

Depending on your proximity to the server and internet connection, the experience can be great to downright unplayable. You can also connect a PS / Xbox controller to your iPad to be able to play the game.

To be clear, once you boot into Fortnite, you will be considered a PC player, not a mobile player. So, no easy Victory Royales for you! I recommend connecting a PS5 controller to your iPad/iPhone or any other controller in order to compete.

Make sure your country/region is supported.

Without further adieu, here’s how you can set up Xbox Cloud Gaming to play Fortnite on your iPhone / iPad in 2022:

Apple doesn’t seem to be unbanning Fortnite just yet. And, with the rise of cloud gaming sites, there’s no reason for you not to play the game on your iOS device if you wish to do so. Until the lawsuits settle, we’ll see no Fortnite on the Apple Store for the foreseeable future.

It’s a great shooter game, and it’s a real pity the players can’t download it from Apple Store but have to find a workaround to play it.