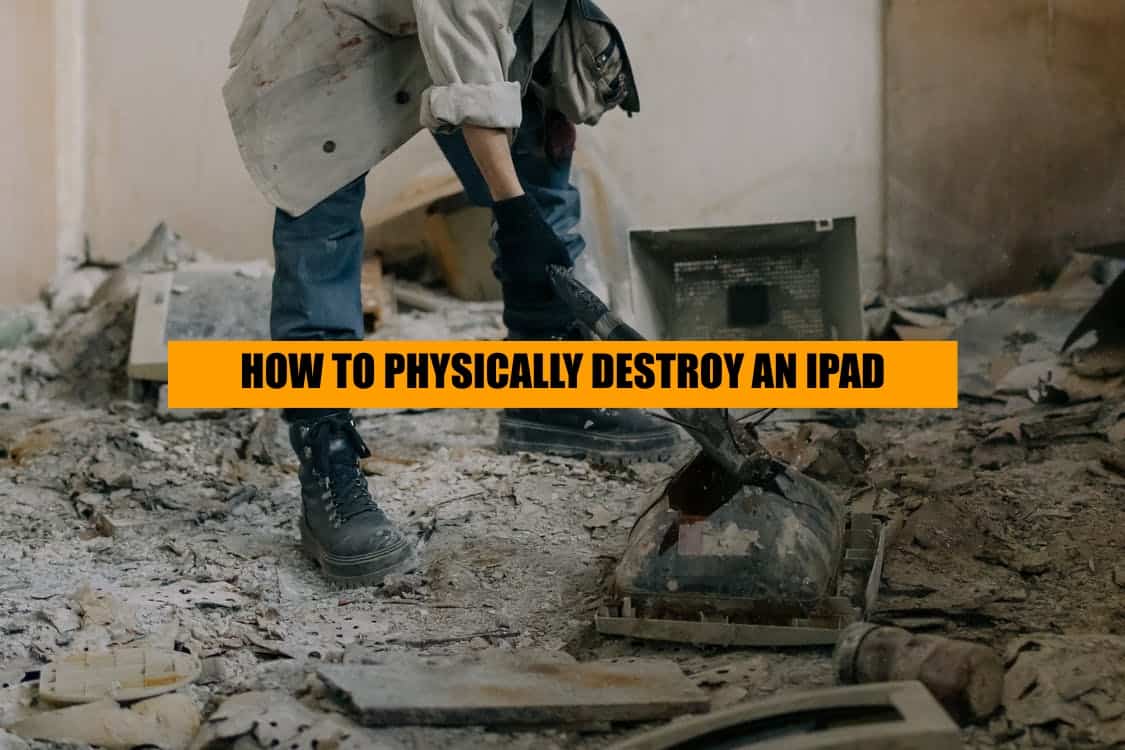 Electronic devices are much less volatile than what you might’ve initially thought. Contrary to popular thought, even resetting your iPad back to factory settings still leaves a chance for data to be recovered. This begs the question, how do you physically destroy an iPad such that data cannot be recovered?

You can destroy your iPad by first deleting your Apple ID and resetting your iPad. Then, you can either drill a hole in your flash memory chip or send your iPad off to an electronics destruction service.

In this article, we’re going to be talking about exactly how you can destroy an iPad alongside whether resetting your iPad ensures whether your data is actually lost or not.

Preparing Your iPad For Destruction

I could end this article by immediately telling you to slam your iPad down with a hammer or throw it off a building. While that would achieve your purpose (or so you think), there still is a chance that the flash storage present inside the iPad may remain intact, allowing data to be recovered.

As we mentioned earlier, flash storage is much more resistant than what you might have initially thought. And, we wouldn’t want to ruin a perfectly functioning iPad just because you want your data to fizzle away into oblivion.

First things first though, deleting your digital presence, Apple ID, and backups is the first part of ensuring your data cannot be recovered. We can’t stress this enough. If your Apple ID is still around, chances are that a backup still exists somewhere.

If you just want to destroy the information present / your iPad itself, we suggest skipping this step.

Your iCloud backups are directly linked to your Apple ID. You can either delete each backup of your iPad individually or just delete the entire iPad account as a whole. Since data can be synced across devices, we recommend just deleting the entire ID. Here’s how:

You might get some warnings informing you not to do so. We suggest reading them to ensure you’ve checked every box. If that’s all, delete the account.

Yes, yes, I know. We just talked about how resetting your iPad can still lead to your data being recovered if someone really wanted to. However, you should go for this step regardless of what it entails as it does guarantee some form of data loss.

Here’s how you can reset your iPad:

With these two steps done, you should now be able to physically destroy your iPad. Now, you don’t have to worry about a backup or a local copy of your iPad’s data existing somewhere, especially in case it has some sensitive information in it.

By physical destruction, we mean the act of ensuring that the iPad is now unusable and that any data present in it has been lost forever with no chance of recovery whatsoever. A cracked screen or a disassembled battery does not count as physical destruction because contents can still be recovered.

With that in mind, there are a few, rather smart ways to physically destroy an iPad that leave as little of an environmental footprint as possible and help ensure you can take your iPad for recycling later.

An electronic destruction service is tasked with safely dismantling, disassembling, and destroying your iPad while ensuring that components that can be recycled are in fact, recycled. Most companies then provide you with a Certificate of Destruction that ensures that your device is indeed, erased.

Generally, companies tend to use an industrial-grade shredder to turn your entire device into fine powder. However, some may opt to recycle some parts like the camera or screen depending on what you consent to.

The process of physically destroying your iPad through these services is rather lucrative as they don’t charge much and get the job done with some level of authenticity.

If you aren’t in the mood of sending your iPad to a destruction facility, you’ll have to do the dirty deed yourself. Your iPad’s flash memory chip contains all your data, the OS, and other sensitive information. If the flash memory is destroyed or removed, then, your iPad is considered destroyed

Here’s how you can physically destroy your iPad on your own:

Congratulations, you’ve physically destroyed your iPad. What’s next? Well, that depends. Most countries have electronic waste disposal guidelines that you must follow. So, you can’t just throw your iPad in the trash can but will instead need to recycle it appropriately.

Moreover, you can also sell what’s remaining of the iPad for parts on eBay or a local repair shop. Or, you can just seal the deal by smashing it with a hammer a few times and then send it off for recycling.

In any case, with these steps, your iPad will be completely destroyed and there will be no chance for data recovery whatsoever.

How To Wipe Your iPad Before Selling It