Here’s everything you need to know about the Huawei MatPad 11.

In 2021 they launched Huawei MatePad 11 is a budget-friendly tablet. The tablet is an alternative for the premium Huawei MatePad Pro 12.6. It is a beautiful tab despite being a budget tablet.

Huawei MatePad 11 doesn’t have an OLED display. Instead, it has an IPS LCD, where they have prioritized color accuracy, which is why Huawei has offered the 120 Hz refresh rate to compensate for it. Let’s see how the Huawei MatePad 11 fares in different categories.

A very solid device, Huawei MatePad 11 has something for everyone. Its compatibility with the M-Pencil is a huge plus. Also, Huawei’s smart magnetic keyboard is only compatible with the Huawei MatePad 11. The features are rock solid, and the pricing is perfect for a mid-range tablet.

Let’s take a look at some of the key specifications of the Huawei MatePad 11.

Who Is This Device For?

If you have gone through the features, you will know how good the Huawei MatePad 11 is for drawing or editing. The 10.95-inch screen helps. On top of that, you get DCI-P3 Color Gamut. The M-Pencil is a useful resource for drawing and editing stuff. With 4096 levels of pressure sensitivity, M-Pencil captures your imagination and puts it on the device as you want. You can take notes, draw or make doodles with it on the device and it will be smooth as silk.

The Huawei MatePad 11 is a perfect 2nd screen for your laptop. You can edit and draw stuff on your device and then smoothly transfer all the data onto your laptop without a hitch. You can work on 2 simultaneous projects simultaneously or drag and drop your files between the screens with ease.

This device is just perfect for gamers. The 120 Hz refresh rate is a made-for-each-other feature for the gamers. You won’t experience lag while playing games. Every game runs smoothly on the device, from Call of Duty to Clash of Clans to Candy Crush. The Snapdragon processor runs the game smoothly, and DCI-P3 Color Gamut makes the display of games even richer.

You get a Stylus and a Keyboard. A 2-in-1 tablet also has a 120Hz screen, just like Apple iPad Pro and Samsung Galaxy Tab S7/S7+. There’s practically no lag when drawing and taking notes. The keyboard is an excellent addition if you have to write many essays and reports. The OS is a bit inconvenient, and you might run into some troubles during your studies, but there are always workarounds and fixes. Of course, you can get iPad Pro or Galaxy Tab S7, but Huawei MatePad 11 offers a way better price.

Huawei Matepad 11 has a USB Type-C Port. It has a 120Hz display and a Stylus. What makes it a perfect choice is you’re into photography. That’s not all. It also has a MicroSD card slot. If you do photography, you know you need that in your device. After 5-6 photoshoots, you won’t have much memory left in your tablet/laptop.

Features of the Huawei MatePad 11

Huawei offers three storage options for the Huawei MatePad 11. The three options are 64GB 6GB RAM, 128GB 6GB RAM, and 256GB 6GB RAM. The memory in every variant remains the same at 6GB but you do get more storage with of course a slight increase in price.

One thing that the Huawei MatePad 11 has that the premium MatePad Pro 12.6 device doesn’t have is the expandable microSD slot. In the MatePad 11, you can expand the storage up to 1 Terabyte.

As far as the performance of HarmonyOS 2.0 goes, it is getting there. You do miss apps like Youtube and Gmail which are like staple apps on every device, but Huawei is adding more and more apps every day to try and extinguish the loss of those two important apps.

Otherwise, the overall performance of the processor is very satisfactory. You can open 4 apps at once on the screen and there won’t be any lag, the transition is smooth when switching between the apps, and the 4 apps at once on a device is a nice touch.

The Huawei MatePad 11 has a plastic frame and back. There is only one color – Matte Gray, in which the tablet is available to purchase. There are 4 microphones in the device as well as 4 speakers which are tuned by Harman Kardon for an immersive experience. The device is compatible with styluses, especially with the M-Pencil by Huawei. There is also a Smart Magnetic Keyboard that can be attached with the device that is available to purchase separately.

The Huawei MatePad 11 is equipped with a 13MP main camera with Auto-Focus and has added features such as LED flash, HDR, and Panorama, it also records video in 4K at 1080p@30fps.

The selfie camera is 8MP with fixed focus and records video at 1080p@30fps. Overall it has a decent camera which is expected from Huawei. Huawei always shows up in the camera category and rarely disappoints.

The Huawei MatePad 11 is equipped with a Li-Po 7250 non-removable battery. It also has 22.5W fast charging and 5W reverse charging. Huawei claims that a fully charged MatePad 11 can give up to 12 hours of video playback, which is quite impressive and definitely a trusted companion for your travels.

Other features that are included in the Huawei MatePad 11 are sensors such as Accelerometer, gyro, proximity, and compass. There is no headphone jack in the device.

Let’s see what components Huawei has given in the Huawei MatePad 11 box.

It is important to compare the more recent device with an older device. Especially when it comes to Huawei devices. Considering the Huawei MatePad 10.4 has Kirin OS running within it, it was imperative that there was a comparison between the two devices. There are obvious differences between the two models, but there are still some similarities between them as well. 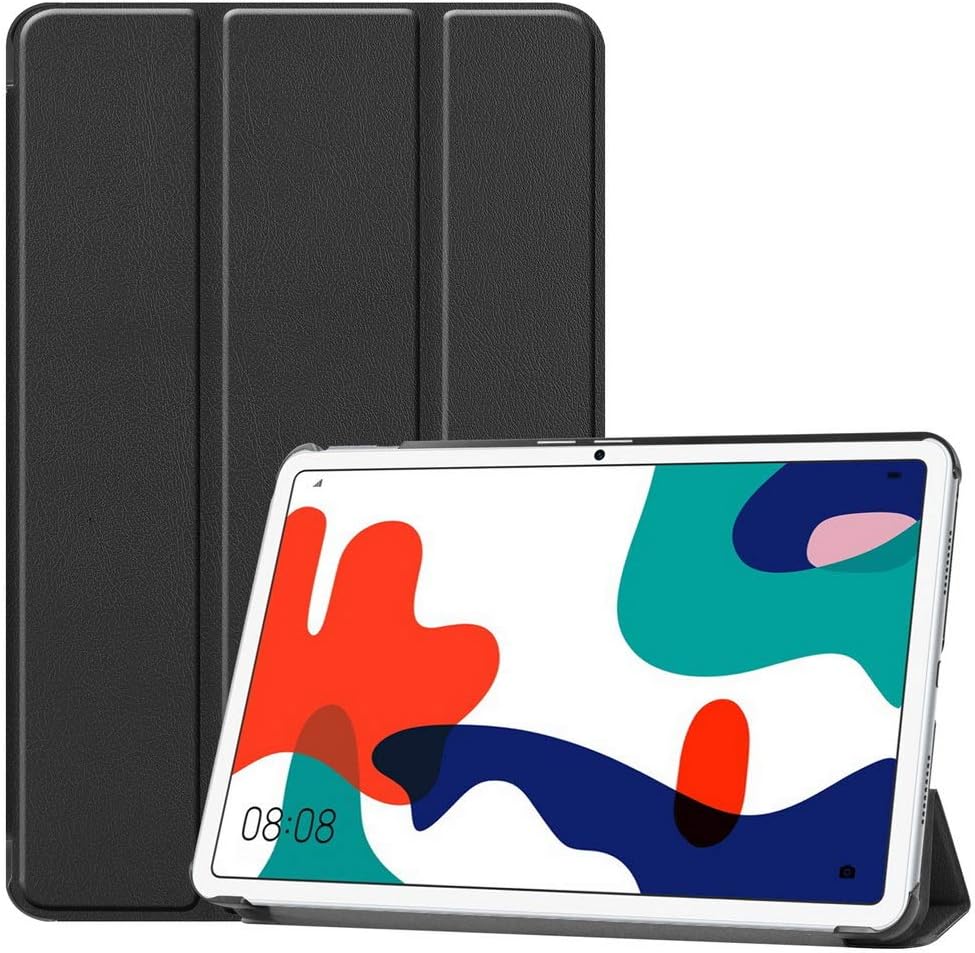 What good is research if you never compare a device of your liking to its direct competition? Here we take a look at the qualities of both Huawei MatePad 11 and Lenovo Yoga Tab 11 and see how they both stand out against each other. Now, both the devices are quality but there are lots of features that differentiate from one another, which may intrigue users as to which way to sway.

Let us look at the different features of both the tabs and see how different or similar the devices are from two different companies.

Which has the better display?

There isn’t much to talk about when it comes to the screen size and type of display. Both have an 11-inch screen with an IPS LCD display. But the Huawei MatePad 11 trumps the Lenovo Yoga Tab 11 in every other display feature. The MatePad 11 has a cool 82.9% screen-to-body ratio, while the Yoga Tab 11 has a 79.4% screen-to-body ratio. The pixel resolution is heavily lopsided too with the Huawei MatePad 11 having a 2560 x 1600 resolution compared to Lenovo Yoga Tab 11’s 1200 x 2000 resolution.

Which has the better processor?

Oh yes, the talking point! Let the cat out of the bag and just reveal the fact that Lenovo Yoga Tab 11 has a better processor than the Huawei MatePad 11 and the only reason for that is that it includes Google Play Service. Huawei’s HarmonyOS 2.0 is still under development, Huawei has kept updating and upgrading the Harmony OS 2.0, but it still isn’t in competition with the Google OS.

Again, there is not much in terms of the superior performance of Huawei or Lenovo but the fact that Lenovo can still use Google as its OS tilts the tide in its favor.

Which has a better battery?

The charging of the devices is where things get interesting. Both have fast charging, while Lenovo offers 20W fast charging, Huawei offers 22W fast charging as well as 5W reverse charging. So in the end everything balances out and it comes down to personal preference.

Which has a better camera?

Lenovo has a very standard camera, whereas Huawei has actually put an effort in to give its users a better, higher quality camera with additional features.

Which has better storage?

Verdict after using both the devices

In a nutshell, the Huawei MatePad 11 is a better tablet than the Lenovo Yoga Smart Tab 11. But it all comes down to recency bias as well. The Huawei MatePad has all the latest features and Lenovo, despite being only a year older does have some features that need an upgrade.

Although one feature that can sway the users is Lenovo’s ability to still use Google Play Service. Apart from that Huawei has an upper hand in almost every other category. But again it comes down to personal preference, it is our favorite and most repeated line in our verdicts but we know that the customer is always the king and in the end, their taste is all that matters.

Does the Huawei MatePad 11 have a cellular variant?

No, unfortunately, the Huawei MatePad 11 does not have a cellular variant but only the Wi-Fi variant. It does not possess a sim or a nano-sim slot.

Is the Huawei MatePad 11 compatible with Styluses?

Yes, the Huawei MatePad 11 is compatible with styluses. You can use any stylus from the market and it will work on the MatePad 11. But our recommendation is the Huawei M-Pencil which is the perfect companion for the MatePad 11 and it was launched keeping these models in mind.

Is the Huawei MatePad 11 water and dust-resistant?

The Huawei MatePad 11 is not water or dust-resistant, so it would be wise if you kept the device away from the beaches, pools, and polluted areas.

Yes, the ban that was imposed by the United States of America in 2019 on Huawei devices still stands to this day. That means Huawei is unable to add the Google Play Service in their devices. But they created their own OS in HarmonyOS 2.0 which is trying to match up with the Google OS and with little by little upgrades every year it is getting nearer to the Google OS.

The Huawei MatePad 11 is a solid mid-range tablet. For $405 you can do a lot worse. The main strength of the MatePad 11 is its 120 Hz refresh rate, quality display, good battery life, and excellent compatibility with the M-Pencil and Huawei Smart Keyboard. The TUV Rheinland certificate also helps the tablet. Huawei launched this device so that users can have a quality alternative to the premium Huawei MatePad Pro 12.6, which is much more pricey and in the premium section.

The biggest disadvantage Huawei has when it comes to their phones, tablets or laptops is their inability to use Google Play Service anymore. This is a major handicap for Huawei in the international market and it still turns off many people because they need Gmail and Youtube in their daily lives. Until Huawei finds a direct alternative to these two major features the sales internationally will keep taking a hit.

In the end, the Huawei MatePad 11 has everything going for it feature-wise but the absence of Google Play Service is a major handicap for the device.