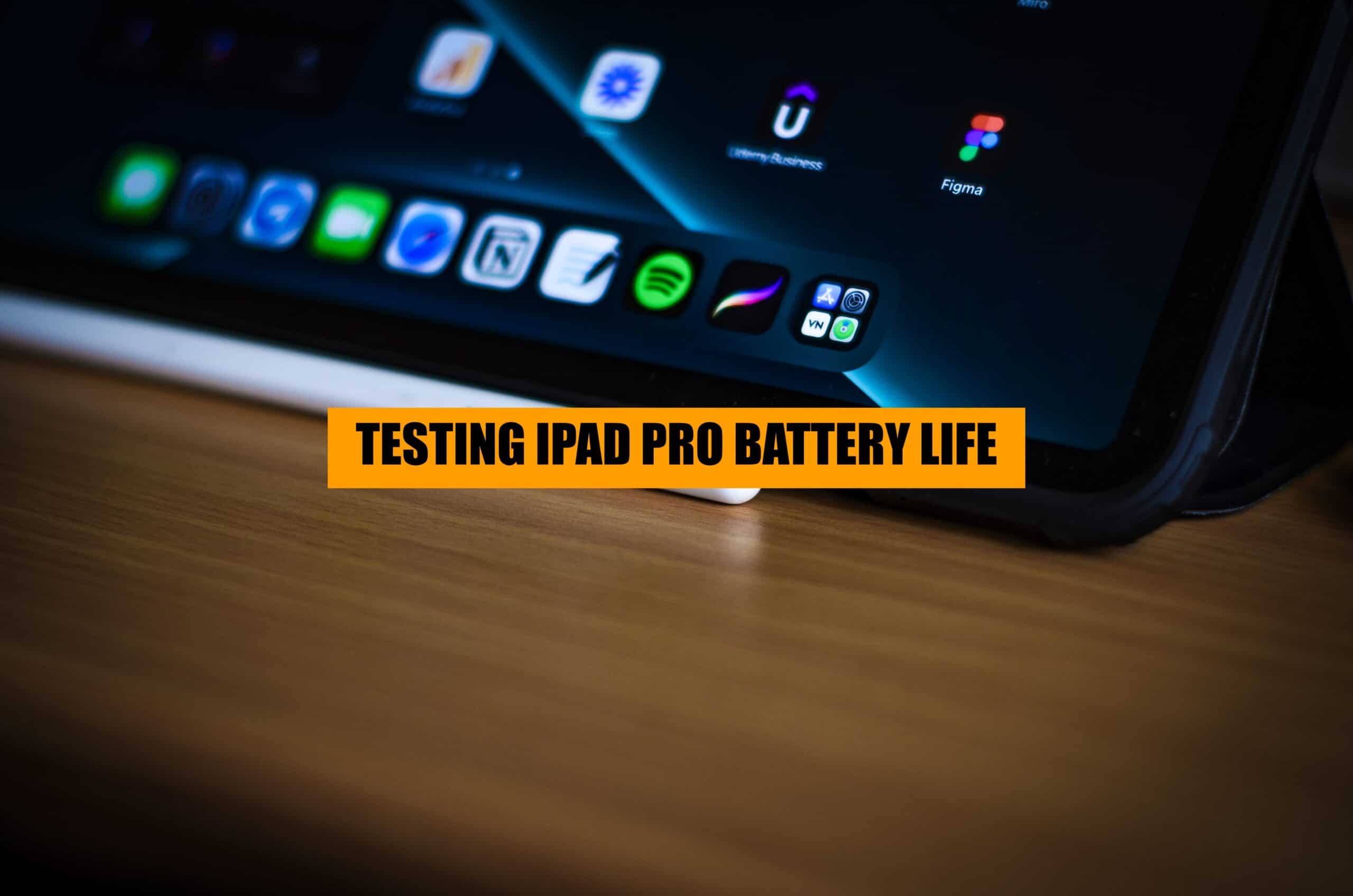 The M1 chip has been hailed as the king of battery life for the M1 Air and the Macbook Pro. With the inclusion of the chip in the iPad Pro, too, it is only a matter of time before we tested out the battery on the Pro too. So, with a weekend to kill, I finally tested whether this tablet lived to its claims.

A quick premise, the iPad Pro M1 had an Apple Pencil 2 and a Magic Keyboard connected to it. While they are known to drain your battery life, I felt like it was important to have both these accessories as they gave a more accurate representation of the battery life you can expect.

So, in this article, I will be testing the iPad Pro M1’s battery life in a real-time scenario alongside what you can expect from the tablet in certain scenarios, including gaming and just plain watching video.

I’ve journaled my entire log using the Notes application on the iPad and then extrapolated it to Google Docs. Moreover, this blog itself is also written and published on the tablet. So, without further adieu, here’s a day(s) with the iPad’s battery.

DISCLAIMER: Some screenshots were taken at a later date to keep testing as accurate as possible.

12:00 AM: It’s time to get this show on the road; I have 100% battery. And I’ve just started playing some tunes on Spotify using the speakers. I’m at medium brightness, and TrueTone is off. I’m going to be putting Apex Legends Mobile up on the download and will be watching YouTube videos till that happens.

12:15 AM: I have been watching the video for about fifteen minutes now, and I’m at ninety-six percent. The battery drain is there. But that’s primarily because I’m downloading Apex Legends over a 5 GHz network.

12:20 AM: Apex Legends is done downloading, and I’m at ninety-five percent; let’s start playing the game! (After a few 100 MBs of downloading, of course.)

12:47 AM: I just finished an Apex Legends Mobile match. Not that it matters, but 14 kills is a big achievement for me! (I played with the PS5 controller). Anyways, we’re down to eighty-six percent now. This is quite decent, considering I was playing the game at maximum graphics and FPS.

2:30 AM: Finally finished my Netflix binging session. Ended up watching two and a half episodes of The 100. Looks like a good show. The speakers of the iPad Pro definitely helped with the overall immersion. But, I was most impressed with the mini-LED display and the overall pop of color due to HDR. In any case, I’m at seventy-four percent now and am calling it a night!

2:00 PM: I picked the tablet up late this afternoon. With about twelve hours of idle time, I am at seventy percent now. I’ve just attached the Apple Magic Keyboard in. It is time to get some work done! I’ve also connected my AirPods Pro and will be playing songs constantly on the background as well.

3:00 PM: Heading out for lunch, I will be grabbing my iPad Pro with me. Instead of using the Personal Hotspot from my iPhone like I usually do, I’ll be resorting to using the LTE connection on the iPad. Currently, I’m at sixty-four percent.

Here’s what I had for lunch, in case you were wondering for some reason. The picture is courtesy of an iPhone 14 Pro Max taken in standard mode. No RAW trickery here, lads.

4:15 PM: Whoa! So that’s where battery drain comes in. The iPad is now at a whopping fourty-nine percent. I am in quite a crowded cafe, so the tablet definitely has to struggle for signal. The overall LTE speed from my testing was quite decent, averaging around 28 Mbps. From what I reckon, 5G should consume more battery.

5:20 PM: I’ve used the iPad as a glorified music player throughout my entire commute back. I streamed music through Spotify with my tablet connected through cellular. The current battery is now at forty percent. Definitely sensing a pattern here with cellular.

6:43 PM: At thirty-four percent now. I spent the better part of the hour writing this very guide that you are reading. I’ve thoroughly enjoyed the Apple Magic Keyboard. Kudos to Apple for finally making the keyboard feel much more tactile. Besides that, while draining this iPad feels like a pipe dream, the battery life of the M1 chip is commendable, to say the least.

7:30 PM: Still clacking away at the keyboard at about twenty-five percent. Im seeing the battery degrade slowly as I’ve moved to my home WiFi and am not performing a strenuous task. So, on a normal’s day use when you aren’t out and about, you can definitely get 13-14 hours of screen on time with no qualms whatsoever.

8:00 PM: Time for a break, this time, I’m onto YouTube playing 1080p video at 60 FPS. There are some Dota 2 matches that I missed out on watching, which I wanted to catch up with for the longest of time. Currently, I’m at twenty percent.

9:00 PM: We’re at thirteen percent now. It’s the final showdown, and I can’t wait for the battery of this table to finally end. It has been through a lot, and I still am surprised how it’s able to keep up with the face.

10:05 PM: At 5 percent now, we should be going down soon. I’m listening to French opera on Spotify before the final end of the iPad. How iconic. The speakers, might I add, are surprisingly great given the form factor of the device. In fact, I’d argue that they sound better than the Macbook Pro 14” in some cases.

10:40 PM: We’ve finally gone down. Hallelujah. The iPad Pro 5th Gen isn’t turning on. It definitely deserves some rest after the astounding 9 hours of screen time on the device.

Now that I’ve run the battery through its paces (and have used the device for a while), here’s a quick look at what I’ve identified in terms of battery life:

Now, here’s a quick look at the battery timing of the iPad Pro M1 without being connected to a peripheral device.

Now, truth be told, our observations were done in controller environments. And while they are as akin to real-life observations as possible, some variables such as a difference in temperature, how strong your signal strength is if you are using cellular alongside what tasks you end up doing can heavily dictate your overall battery life.

The iPad Pro M1 is more than capable of stellar battery life. It honestly beat my expectations in every possible way. Let’s see how the device holds up in a few years when there are more demanding tasks and the battery has naturally degraded a bit.

It took me a little less than 3 hours to charge my iPad Pro M1 from 0 to 100. I used a 30W charger. I hope this article gave you guys some insight on how good or bad, depending on your perspective, the iPad Pro battery is and what you can expect.