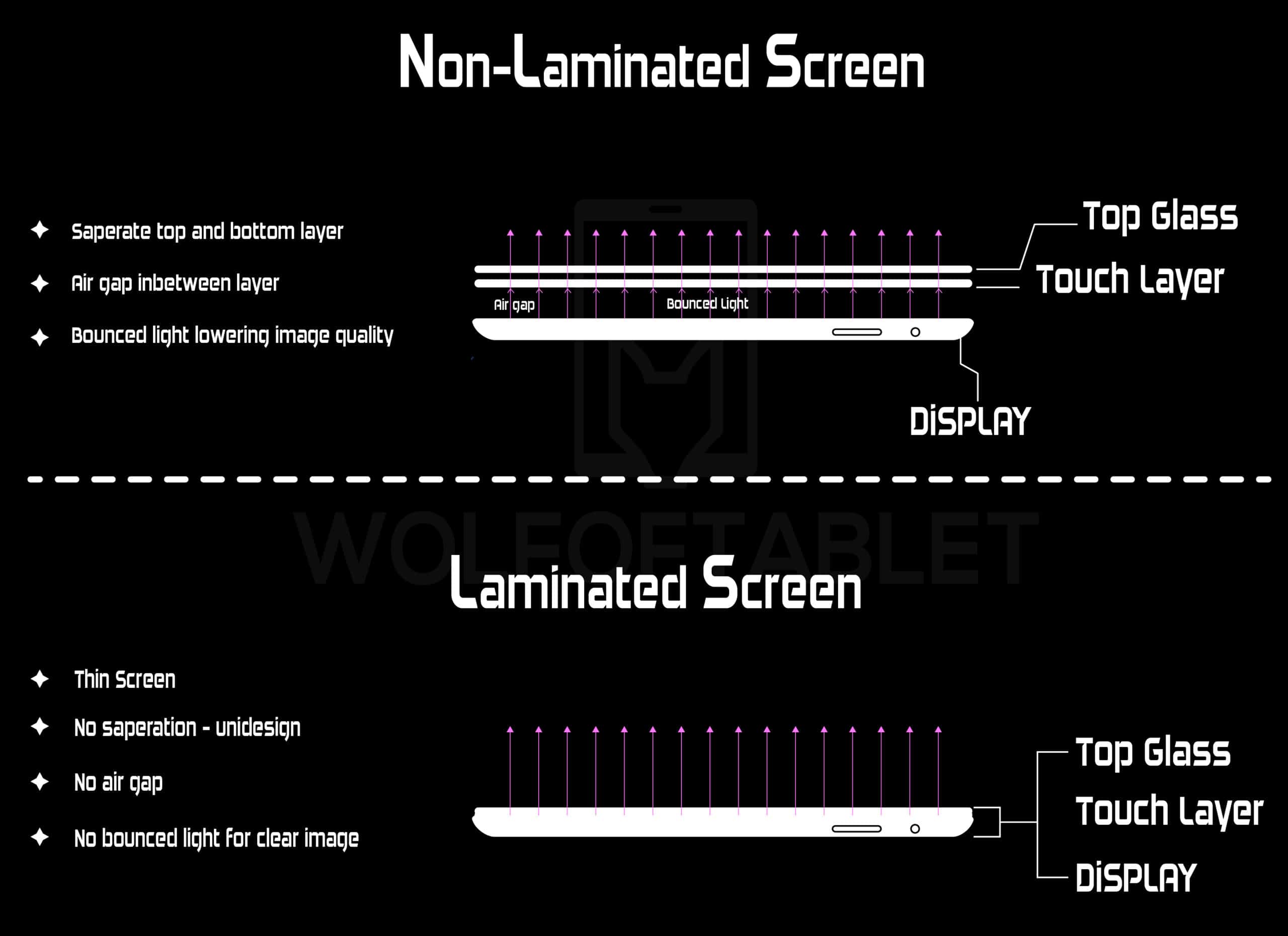 Getting a new device means understanding a ton of terms to understand the specs. Whether it’s a smartphone, laptop, or tablet, display types can make a big impact on the overall experience you have. There are a lot of terms thrown around in the display world but we’re sure you’ve heard of the term, “laminated display.”

If you don’t know what that is and the differences it can make, this article is for you. We simplify what it means to have a laminated display along with the pros and cons of it. If that’s what you’re looking to answer, let’s dive right into it.

What Is Non-Laminated Display?

All three layers of this display make the device a whole lot thicker. Since they are stacked on top of each other, air bubbles fill up the space between the two. And when your screen lights up, the light quality goes down because of the air gap creating a dispersed effect.

As a result, you have a hazed display quality where the colors don’t reach their full potential. Additionally, you’ll be facing a dust problem where dust fills up the air gap in the display, worsening the hazy visual quality.

What Is A Laminated Display?

So it is a top glass layer, touch panel, and display panel all in one. Thanks to that, you can enjoy no air pockets and no disturbing light dispersion!

With all layers combined into one, your thickness is reduced by a great margin. So what do you get at the end? A thin and classy display layer that can ultimately contribute to lightweight and thin devices!

An expert eye can immediately notice the way the colors come to life and how the entire display looks much more natural in a laminated display. Unlike non-laminated displays, there are no air gaps that will refract light unnaturally in different directions so you get crisper, clearer, and an overall improved visual display.

Imagine a bright display, that has anti-glare, and is crisp. That’s what laminated displays are aimed to get in a device. Because your display is right beneath the top glass panel, you’re getting a visual quality that is much different and better.

Laminated displays are known to have a clearer visual quality because of how the light isn’t dispersed through medium changes.

Now here’s something to focus in-depth on. Parallax error is defined as the difference in distance between your stylus’ tip and the registered touch on the display. It’s caused by the distance between the top glass panel and the actual display.

Of course, with non-laminated screens, you can notice a delay in touch registering as well as the parallax error which can throw off digital artists. To solve this, laminated screens were developed and now major manufacturers of drawing tablets and other devices included laminated displays in their manufacturing plans.

For people who want better visibility outside in bright environments, laminated displays are the best bet. With clearer display quality, you get an anti-glare device that does much better than its non-laminated counterpart.

First of all, laminated displays are the newest advancement in terms of screen displays. It makes your device thinner, improves visual quality, and does so much more. But that does come along with a heavy price tag.

So be prepared to pay more for any device with a laminated display, compared to a non-laminated counterpart.

A thin and delicate laminated screen has been shown to be more prone to damage. Since a single layer functions as both a glass protector, a touch panel, and the display itself, the slightest damage can mean damage to all of it.

Since it’s glued together, the slightest damage to the top glass panel can mean an unnecessary and costly expense to repair the entire display. Yep, despite it being functioning!

How Does This Impact User Experience?

If you’re wondering, “okay so how does all of this change my experience?” I’ve focused this part of the blog on you. The display type of your device changes 3 aspects of your usability and here’s what you should know:

The first thing is the quality of pictures is much better when compared to non-laminated displays. Pictures don’t look like you’re viewing them from a lens but rather a natural appearance is provoked.

Even if you’re sitting outdoors like in your garden, you’ll be able to view the screen content easily and there’s no dust trapped inside the display to make it look foggy. You also get a lot of anti-glare in laminated screens.

The second thing that impacts your experience with your device is reliability. Laminated displays are very delicate and sensitive to the smallest of drops and can be broken without much effort. This can add to your costs as repairing these is much more expensive.

For an artist, this is a critical aspect to consider. With a laminated display, you’re able to enjoy a device without any touch register lagging. Your strokes have minimal lag as you draw along with no parallax error, giving you a natural pen-to-paper experience.

This difference is more noticeable compared to non-laminated displays which offer a laggy drawing that can ruin drawing experiences for many artists.

Laminated displays offer better visual display, anti-glare, and a thinner screen. But there are some drawbacks to laminated displays as well. They are fragile and can break easily, resulting in expensive repairs.

Does laminated display make a difference?

Yes, it makes a great difference in terms of visual quality. Along with anti-glare, you can expect sharper display and a thinner device. All these benefits make great difference, especially if you’re an artist.

Does a laminated screen reduce glare?

Laminated screens offer anti-glare better than non-laminated screens and can be visible in well-lit environments such as sun-lit rooms. So yes, they do reduce glare in screened devices.

Is a laminated display necessary?

Do Drawing Tablets Need a Computer?
How Long Do iPads Last?
iPad Pro (2021 5th gen) Review
Is 128GB enough for an iPad?