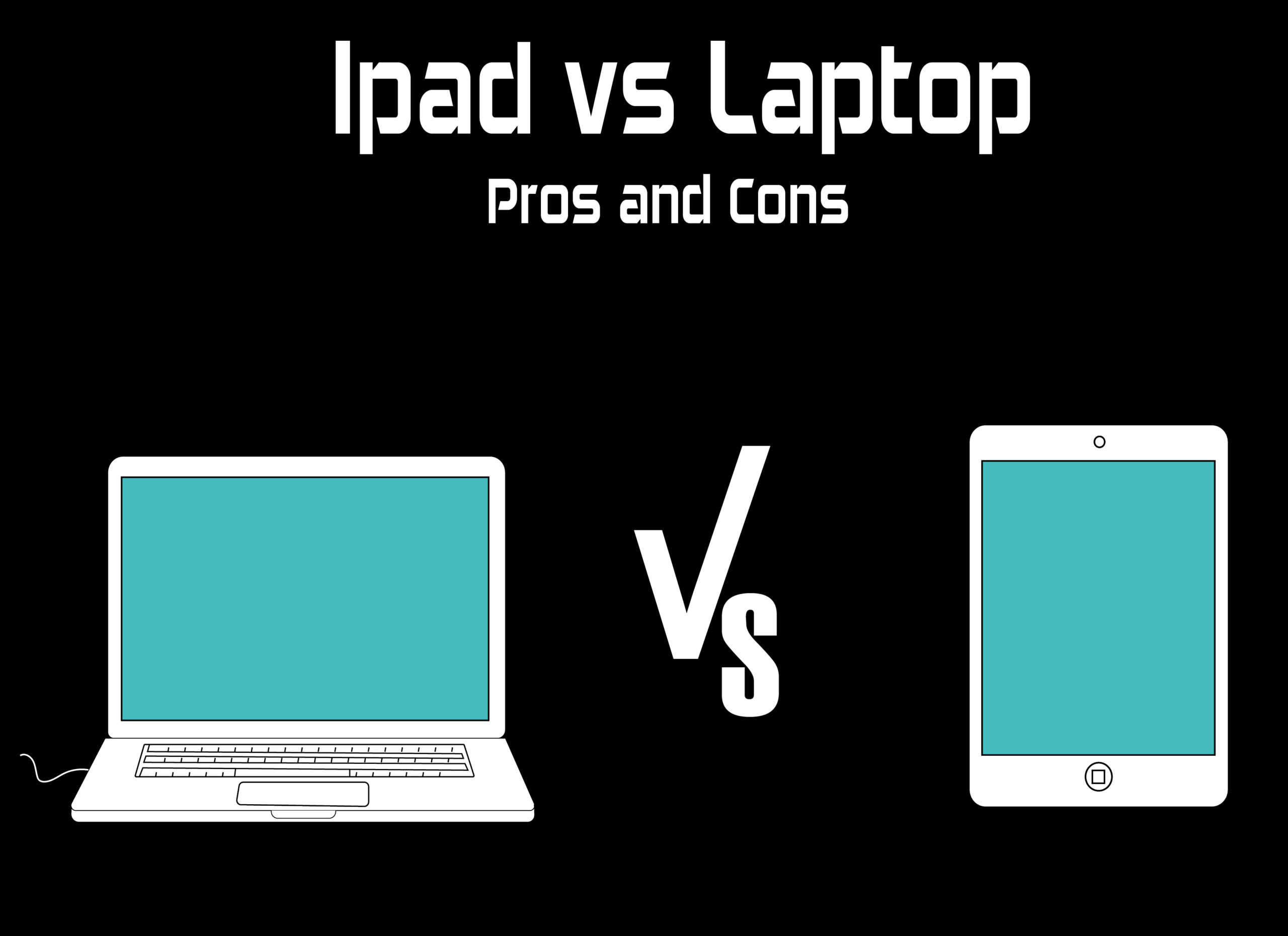 Contents hide
iPad Advantages
Laptop Advantages
Key Differences Between An iPad And A Laptop
Should You Get An iPad If You Already Have A Macbook? Why?
Conclusion

The iPad has single-handedly disrupted the entire consumer electronics space. With a majority market share, laptops have seemingly dwindled in number in front of the mighty iPad. But, avid PC users may still laugh at the idea of their workflow being plausible on an iPad.

But, with the advent of desktop-grade chips like the M1 on the iPad, this begs the question, can you replace your laptop with an iPad? If so, what pros and cons are there for such a transition?

The iPad was first released as a media-consumption device. An extension of your laptop, if you may. A device that you can tuck into bed and watch movies while you do all the heavy work on your laptop / PC. Now, that’s not the case.

Here are 5 key reasons why iPads are better than laptops:

Yes, laptops are portable. But have you ever held an iPad? The fact that you don’t need a table or an input device such as a keyboard to use your iPad is extremely useful. Think about it! How often have you wanted to use your laptop in situations such as when you are stuck in a queue at the mall or on an airplane where you simply lack the space to do so?

In the iPad’s case, all the space you need is one that you already have. In essence, you do not need extra space to use an iPad, unlike a laptop. So, you’ll be able to perform tasks in areas and spaces where bringing a laptop is simply impractical. For most individuals, including me, this is a huge advantage as I can get work done, such as checking my Emails and getting some light editing work done on the go.

Laptops simply do not come with a cellular connection. So, if you want quick access to the internet, you either need to ask the owner of the cafe for the WiFi password, find a public hotspot, or create your own private one using your mobile phone. All of the solutions I’ve mentioned above have their disadvantages.

For instance, the WiFi at a coffee shop is generally not very quick. A public hotspot isn’t very secure, and a private hotspot just drains your phone’s battery. On the other hand, iPads come with a cellular connection(they are a bit more expensive than regular iPads). This lets you use the device completely independently from your phone, as you can answer calls and texts from your iPad while also accessing the internet.

So, if you want to travel light and aren’t in the mood to bring your phone or a cellular device while still remaining connected, the iPad is an obvious choice. We aren’t going to be seeing cellular laptops anytime soon. So, this point will remain in the tablet’s favor for years to come.

Laptops are generally confined to a few input types. They generally come with a keyboard and trackpad. Now, I know what you are thinking – touchscreen and even stylus laptops exist. Yes, they do. But, you end up either sacrificing on-screen resolution or refresh rate when you opt for laptops with touchscreens.

On the other hand, the iPad comes with a color-accurate panel, is touch-sensitive, and allows for professional-grade styluses such as the iPad Pencil to be used seamlessly with the device. What’s more, is that accessories like the Magic Keyboard also let you use a trackpad and a keyboard with the device.

The primary advantage of the iPad, then, is versatility, don’t want to use a keyboard today? No worries, don’t bring your Magic Keyboard along. Are you in the mood to take notes? No problem, use the Apple Pencil. My point is, that no matter what use case you have you’ll be able to mold your iPad according to your needs.

On the other hand, you are stuck with a keyboard and trackpad on your laptop, even though you might not want to use it at that particular point. So, you carry extra weight for functionalities that are seemingly useless for you at that instance.

The iPad has a more user-friendly interface compared to a laptop. There’s no doubt about that. The iPad is meant to be used by kids, adults, and older individuals alike. So, Apple has purposefully designed the OS to be accessible to everyone.

Therefore, if you are someone who’s not that adept with technology or is annoyed by the hoops you need to jump through to get a simple task done, the iPad is for you. Don’t get us wrong, though. With the advent of more desktop-like features such as Stage Manager on the iPad, the device feels more capable now than ever for professionals.

As we mentioned earlier, the iPad was primarily designed as a media-consumption device. There’s something special about using your iPad plugged in with some decent headphones tucked away in bed while watching your favorite movie. Yes, laptops do that very well too.

But, this advantage is better understood when we add up all the advantages we mentioned above. Think about it. The fact that the iPad is more portable means it’s easier to set up wherever you want to for the perfect movie session. If you are on a camping trip, having access to cellular means you can stream a movie anywhere.

The fact that you have more input methods means you can use either the touchscreen, keyboard, trackpad or the Apple Pencil even to find your favorite movie. And it is so easy to use compared to a laptop as you just need to tap on an application, and you are good to go instead of using a browser.

With all these points in mind, it is quite obvious to see that the iPad is definitely the better choice for media consumption. And we’ve already established the point that the iPad allows for productivity when you let it, too.

Let’s talk about the 5 key reasons why Laptops are better than iPads:

Now that we’ve gone over exactly why you should replace your laptop with an iPad, let’s go over why you probably shouldn’t opt for the replacement. We’ll also be going over particular use cases where you definitely shouldn’t transition to an iPad.

Let’s face it, iPads have come a long way. But, if you want the best of the best, the iPad definitely can’t keep up with an M1 Pro or a Ryzen 7 5700x. Now, for most individuals who have a casual use case, the M1 is more than enough.

But, if you are a professional user who can’t afford to face any lag, a laptop leaves the iPad in the dust. Let’s get this out of the way, though;  a casual user who surfs the web watches movies, and writes articles doesn’t need the extra computing power from an iPad. But, that isn’t the case for everyone. So, we’d definitely consider a con as you can’t spec-up an iPad with more RAM, for instance, to meet your needs.

There are hundreds of laptops released every year, while there are a few iPad models refreshed every year. In all honesty, I’d make the same case for Android vs. iOS too. If you are happy with what the iPhone offers, great. But, if you want something specific, then Android is definitely where you head to.

Let’s say you want a larger screen, an iPad clocks out at 12.9”. Maybe you want more RAM and a specific amount of storage. Well, what you see is what you get with an iPad. On the other hand, there are hundreds of laptops that cater to different use cases, which turns into one of their biggest advantages in the case of transitioning to an iPad.

The iPad is getting a lot more desktop-grade applications every year. However, they don’t really compare to the number of applications you have in, well, a desktop. If you are in the mood of using Cinebench, playing a casual match of League of Legends, or want to get some serious music production work in Logic, that simply isn’t possible on iPad.

So, once again, if you are a professional or even a casual user that really needs to use a particular desktop application, completely transitioning to an iPad will hinder your workflow. Yes, iPadOS alternatives exist – but, it is very normal for them not to have the exact functionality you require.

Laptops offer a lot more in terms of expansion as compared to iPads. This is because they have no expansion abilities whatsoever. Want more RAM? Slap in a new stick in your laptop. Want more storage? Well, your new NVMe drive awaits. In the iPad’s case, you’ll have to purchase an entirely new model just to get expansion options that cost a fraction of the tablet’s cost on a laptop.

So, it makes a lot more sense for someone who’s going to be using their device for a long time and has ever-increasing needs to opt for a laptop instead of an iPad.

iPadOS supports a lot more peripherals than it did earlier. From external monitors to mice and trackpads. However, a laptop still reigns supreme in terms of peripherals. From network cards to external graphics cards and storage drives, there are not a lot of peripherals that cannot be connected to laptops.

On the other hand, an iPad can only support peripherals that Apple allows them to. So, while the company is trying to integrate more peripherals, they’ll definitely never reach the extent of a laptop.

Key Differences Between An iPad And A Laptop

If you’ve gone through the article or just want a quick skim, we’ll be listing down the key differences between an iPad and a laptop that’ll help you make a decision more effortlessly:

Should You Get An iPad If You Already Have A Macbook? Why?

Yes, you should get an iPad if you already have a Macbook. This is because the iPad allows for many more use cases that the Macbook simply cannot provide. For instance, if you want an ultra-portable device, an iPad makes sense.

If you want to take some notes, consume media or use the Apple Pencil, the iPad remains a vital part of your arsenal. Couple that with some niche abilities such as being able to use your tablet as a secondary monitor, having access to a much better camera, and a cellular connection definitely takes the best out of both devices.