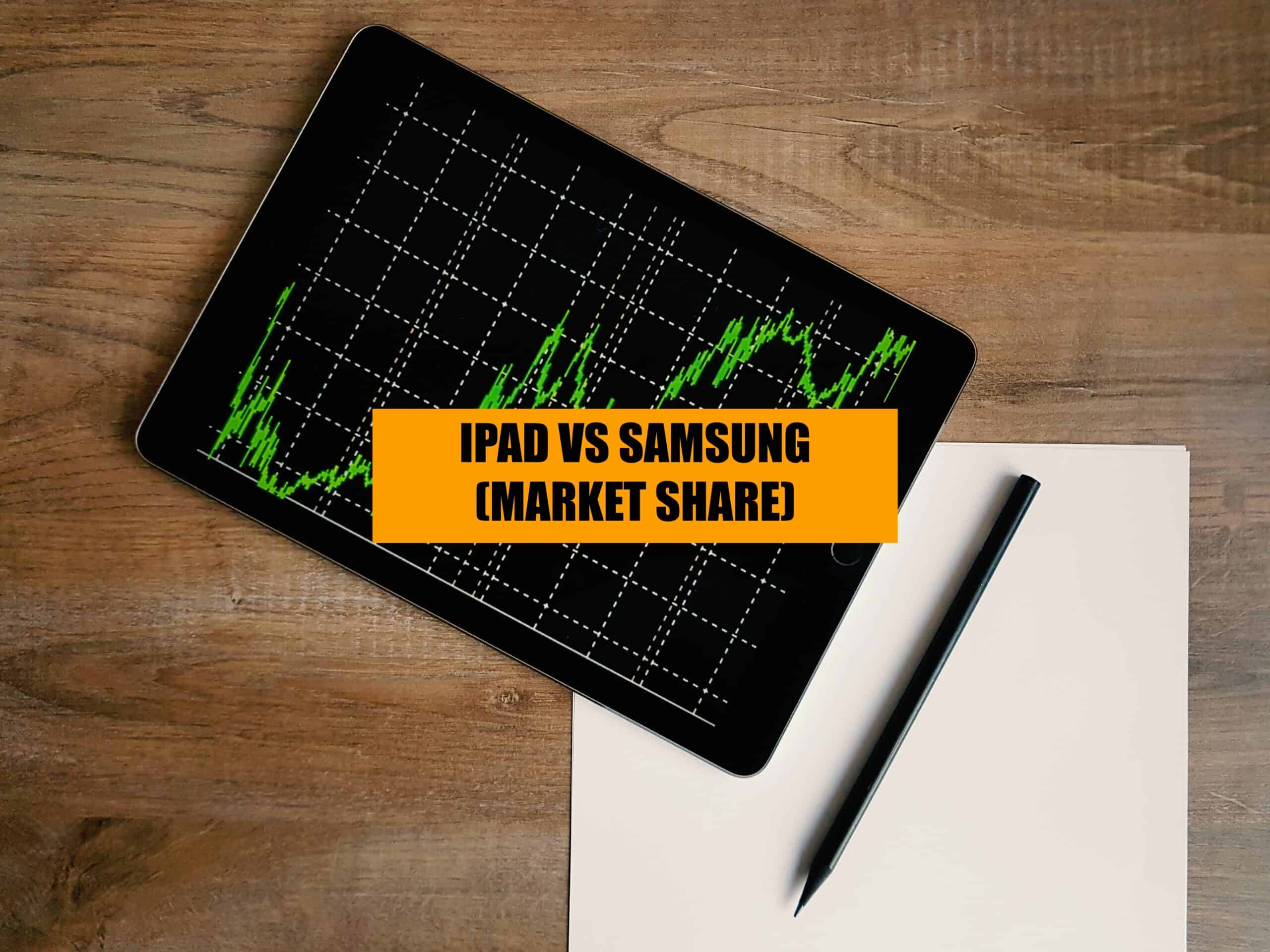 Samsung and Apple have been trading bouts ever since the tablet market rose through the ranks. With more consumers bagging tablets, both companies have tried to capture more of the market share every year. With statistics released for 2022, let’s take a look at the market share differences between Samsung and iPad.

Before we delve into who ended up reigning supreme, let’s take a look at the statistics:

Taking a look at the table above, Apple is leaps ahead of Samsung in terms of market share. We’re seeing a decrease of 1% from Apple’s end from last year, while Samsung has lost 2% of its shares from 2022. .

In terms of overall shipments, we see an increase of 0.15% in tablets all over the globe. Now, let’s get an idea of the differences between Samsung tablets and iPads in terms of market share.

For growth rates, we’re seeing the entire market slow down, with Samsung going down in growth rate by a staggering 10%. But, the brunt of the change is being taken by Samsung. Primarily, this is due to their malleability in the market since they do not essentially have any innovative or unique products. Ultimately, a Samsung tablet remains an Android tablet.

On the other hand, while Apple has also seen a loss of growth of about 2% from estimated projections, the reason why it remains relatively stable is that its products, unlike Samsung, are unique. If you are looking for an iPad, Apple remains the only place where you can get one. The same goes for an artist who wants to use Procreate. Procreate doesn’t support Android. This is why Apple has retained is stability, unlike Samsung.

Clearly, since Android tablets now have more options, we’re seeing Samsung take the brunt of the trauma while Apple remains fairly unaffected. This is because more Android tablets generally won’t affect the sales of iPads as they are meant to cater to two very different demographics.

Apple is producing better tablets in 2022, and it has a great market share lead over Samsung this year too. While Samsung has a considerable market share, we’re seeing a difference of about 8.2 million units between the two devices.

Now, let’s take a look at the devices released by both brands and see how they compare in terms of market share.

Apple has retained a formidable lead over Samsung simply because they’ve released better products. Couple that with their introduction of cheaper, more reasonably priced models such as the iPad Air / iPad Mini, and their emphasis on quality software has led professionals to prefer iPadOS. While Samsung has made some strides (which we’re going to be talking about), let’s first discuss why Apple has kept its dominant lead:

iPadOS is the only operating system released only for tablets. Unlike Android, which is accustomed to tablets over the years, iPadOS is based on iOS but has changed its trajectory by introducing features that are meant for larger devices.

Now, with the iPad, we are also greeted with iOS’s stellar application support. Since Apple pays a lot of heed in trying to introduce the best applications possible, professionals, such as artists, prefer the iPad for their needs.

For instance, there’s no real alternative to Procreate in terms of quality on the Google Play Store. Couple that with the fact that we’re seeing hardware leaps with the Apple Pencil 2, and it’s clear that Apple has cemented itself as the de facto standard for a professional drawing tablet.

Besides just artists, though, professionals from video creators and editors appreciate the color-accurate display, especially with the introduction of mini-LED, which provides excellent contrast ratios.

All in all, Apple’s dedicated emphasis on the iPad, both in terms of software and hardware, has led them to pertain a lead over Samsung, which doesn’t seem to be going away anytime soon.

We finally got to see the iPad Air getting the Apple Silicon treatment with the M1 and a complete design revamp too; with a bunch of new colors and a student discount to match, the new iPad Air has been one of the pivotal reasons why the iPad has kept its dominance over Samsung.

Moreover, both the iPad Mini and iPad Air are the best selling iPads out of the entire lineup. The fact that they’ve been cost-effective, appeal to a broader demographic, and serve as a great introduction to iPadOS has led to most consumers preferring them over their Android counterparts. Since iPads tend to last longer, the measly price difference of a few dollars doesn’t really take into account the years of extra support Apple provides compared to Android.

Samsung’s greatest strides in the tablet market come from their budget-oriented and high-end tablets. The primary reason why they’re able to maintain a healthy market share is due to their budget-focused tablets that are meant for kids and students who don’t want much out of their tablets other than the bare minimum.

The Tab S8 Ultra’s 14.6-inch OLED display are here to make a statement. A direct competitor to the iPad Pro equipped with a Snapdragon 8 Gen-1 coming in with an S Pen included with 45W of fast charging. The tablet feels premium and is an absolute joy to use. So, for anyone who’s not a big fan of iPad OS, the S8 Ultra is an absolute no-brainer as no other Android tablet comes close.

The Samsung Galaxy Tab A7 Lite is a great tablet for students and kids alike. It offers 10 hours of battery life equipped with a MediaTek MT8768T. The reason why you’d opt for this tablet over the iPad is simply due to the price. The A7 Lite offers a lot of value for the overall cost of the product, which makes it a great snag.

Future projection estimate that the iPad will remain in the lead in 2023. This is because we’re not seeing significant improvements to Samsung’s ecosystem, which has further kept the iPad in the lead.

The fact that the iPad is synonymous with what it truly means to be a tablet has allowed it to keep a substantial share in the market. Here are our estimated projections for 2023:

We’re expecting to see a reduction in the overall market share Samsung loses next year. This is because, 1 with the end of the pandemic, we’re going to be looking towards a lesser amount of cheaper Android tablets being purchased due to the lack of online classes and learning.

Suffice it to say; that we’re still going to be expecting Apple to have a dominant lead over Samsung for the foreseeable future. Until then, the tablet market is definitely going through some shakeups, which can always change market trends.