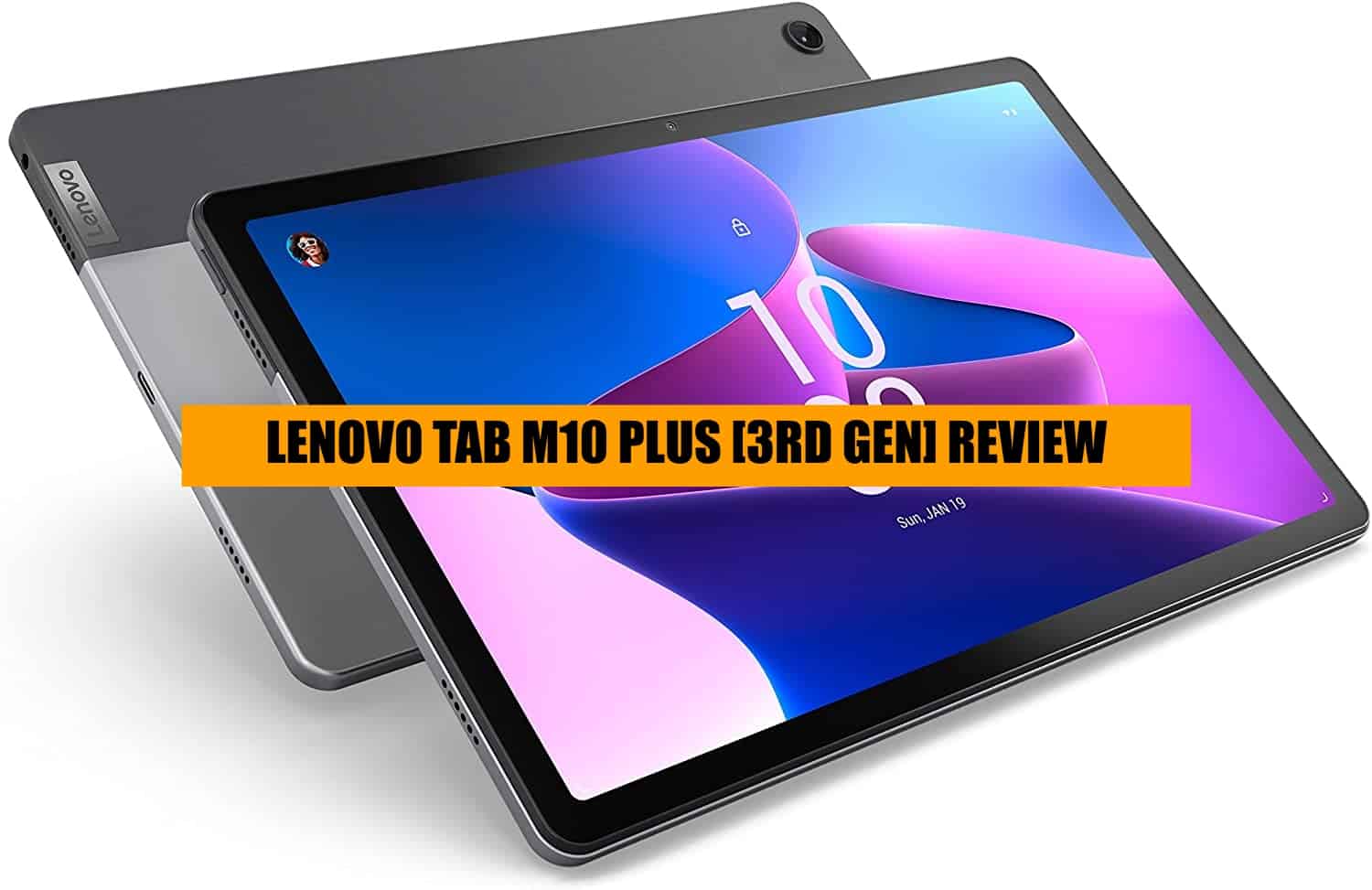 In the world of tablets, there seldom is a time when we are met with great options from Android’s end in response to Apple’s ever-growing market share. This year, we have two stellar options competing against each other for the mid-range tablet throne.

One contender is the Lenovo Tab M10 Plus, competing with Samsung’s Tab A8. Competitively priced a bit lower, you might be mistaken to presume that the tablet isn’t all that exciting. But, you’d be mistaken. Equipped with a 2K resolution display and thin bezels to match, the Tab M10 Plus makes an enticing package for anyone who wishes to consume multimedia or even get into drawing.

So, with all the hype surrounding the tablet seemingly never-ending, we got our hands on our very own Lenovo Tab M10 Plus. And here’s our review of the tablet. 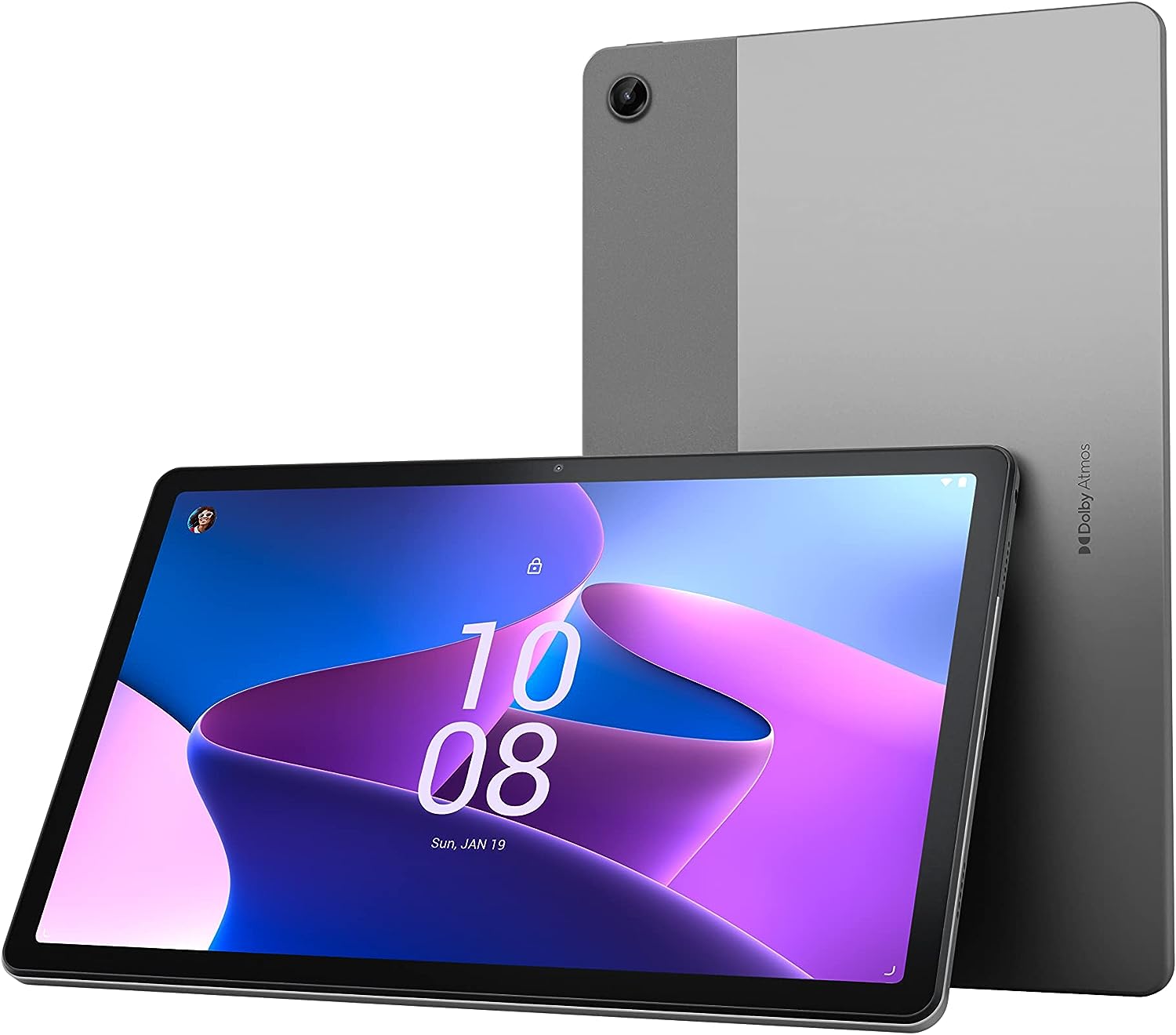 7/10 Our Score
Check Price on Amazon

7
For Movies:8
For Note-Taking:5
For Drawing:4
For Gaming:7
For Reading:9
For Photo-Editing:4
For Video-Calls:9
For Web-Surfing/Social Media:10

What’s In The Box

Just like every other tablet, the Lenovo Tab M10 Plus comes with its own slew of pros and cons. Here’s a look at some of the more notable ones.

Features Of Lenovo Tab M10 Plus

From the get-go, it’s clear that Lenovo has focused more on the multimedia side of things rather than productivity. Why do I say that? Well, while the display is excellent – it isn’t a high refresh rate display which is an indicator of the tablet being catered toward media consumption.

However, once we get down to the features, we’ll be able to understand further why this tablet was developed in the way that it was in the first place.

The Lenovo Tab M10 Plus comes kitted with a 60 Hz, 2000×1200 FHD 10.6” inch panel, which boils down to about 220 ppi. I’m a big fan of the display. It is sharp, crisp, clear, and gets the job done. From consuming content on Netflix to aimlessly scrolling through Twitter, while I could have liked a higher refresh rate, the display was sufficient as-is, and there isn’t a major area for me to complain about.

Talking about the contrast, the colors felt punchy, and the viewing angles were great. But, you can expect some of the brightness to seep away as soon as you view the tablet from the side. Moreover, when taking the tablet out on a sunny day, it fares reasonably well, given that you don’t place it under direct sunlight.

All in all, the display is great, and it gets the job done. It definitely isn’t color-accurate. Compared to my 12.9” iPad Pro, I immediately noticed that HDR content wasn’t nearly as punchy. But, for the price point, there’s not much to complain about.

I used it for notes since I’m not really an artist and was pleasantly surprised with its performance in OneNote. The different pressure sensitivities allowed for the pen to darken or lighten in color depending on the pressure exerted.

Once again, I’m not an artist, but I did scribble a few lines and did actually enjoy the overall experience. So, if you are a beginner artist or someone who wants an inexpensive tablet to take notes, the Tab M10 Plus is great.

The Lenovo Tab M10 Plus comes baked with a MediaTek Helios G80. Rather than bore you with specifications, I think a real-life demonstration and analogy would be more apt to describe the M10’s performance. We’ve had the 4 GB RAM version in our office. And the performance was passable, to say the least.

Gaming on the device led to some occasional stutters. For instance, PUBG Mobile ran butter-smooth at 60 FPS on the highest possible settings. But, whenever there was intense action, I could notice the frames dipping. Nothing to drive home about, though, since the experience was primarily smooth. For lighter games like TFT (Teamfight Tactics), the M10 Plus handled it like a champ and was able to consistently provide great performance for hours on end with no drops in sight.

For casual multitasking, web-browsing, watching a video, or flicking through some Emails, the M10 Plus is able to run circles around most of these tasks. However, the lack of RAM does show up when you try to jump from one application to the other immediately.

Overall, the performance is okay. It was nothing extremely impressive. But, I was able to get a full day of work done entirely on the tablet with no real stutters or lag that would hinder my workflow.

The Lenovo Tab M10 Plus comes equipped with an 8-megapixel camera on both the front and the back. The only difference between the two is the rear-facing camera also is equipped with a mediocre LED flash.

Now, if you were wondering where Lenovo skimped on its components to get the tablet to this price, the camera is definitely one of them. Besides just a quick Zoom meeting for the front and a few documents for the back, there’s not much you can do with the camera. While equipped with a Portrait Mode, every picture that came out of the tablet was inherently fuzzy and unclear.

The Video recording wasn’t that great either. There was no real stabilization present in the camera. So, I reckon that only software-level stabilization was used. The rear-facing camera goes up to 1080p @ 30 FPS – and the results are mediocre at best.

All in all, if you plan to shoot portraits with your Tab M10 Plus or really require great cameras on your tablet for some reason, we suggest you look elsewhere. But, you’d certainly need to increase your budget as almost every mid-range tablet suffers from the same fate in the camera department.

The included 10-Watt charger in the Lenovo Tab M10 Plus takes about 4-5 hours to charge the tablet from 0 to 100%. I used my 20W Apple charger with the tablet and was surprised to see the charging time was almost half to about 1.75 hours.

For a mid-range tablet, the M10 Plus actually has great battery life. Coming in at about 13-14 hours from my testing, I primarily browsed the internet and played some casual and heavy games alongside the casual endless social media scrolling. Ultimately, the battery life is great enough for me not to worry about charging it the entire day.

Compared to most other mid-range tablets, the Lenovo does reign supreme. However, bring in juggernauts like the iPad Air, and you’ll quickly notice the tablet falling out of its depth in terms of battery life. But, for the battery life, we can’t really complain. I would’ve liked faster charging, though.

What Is The Lenovo Tab M10 For?

The Lenovo Tab M10 Plus is meant for someone who needs a larger screen for content consumption and light productivity. From great battery life to the ability to get things such as light word processing done right out of the way, the Tab M10 belongs to a new generation of mid-range tablets that do much more than what you’d expect from one that was at this price point a few years ago.

Besides that, the great display, build quality, and stellar battery life mean that it’s an excellent travel companion for when you are in the mood to watch a movie at high resolutions. You can plug in your headphones using the in-built 3.5 mm headphone jack.

Moreover, the inclusion of a stylus also lets you draw and take notes straight from the tablet. While not comparable to an actual full-fledged drawing tablet, the Tab M10 breaks the expensive barrier to enter the world of digital art in spectacular fashion.

Lenovo Tab M10 Plus Vs. Galaxy Tab A8 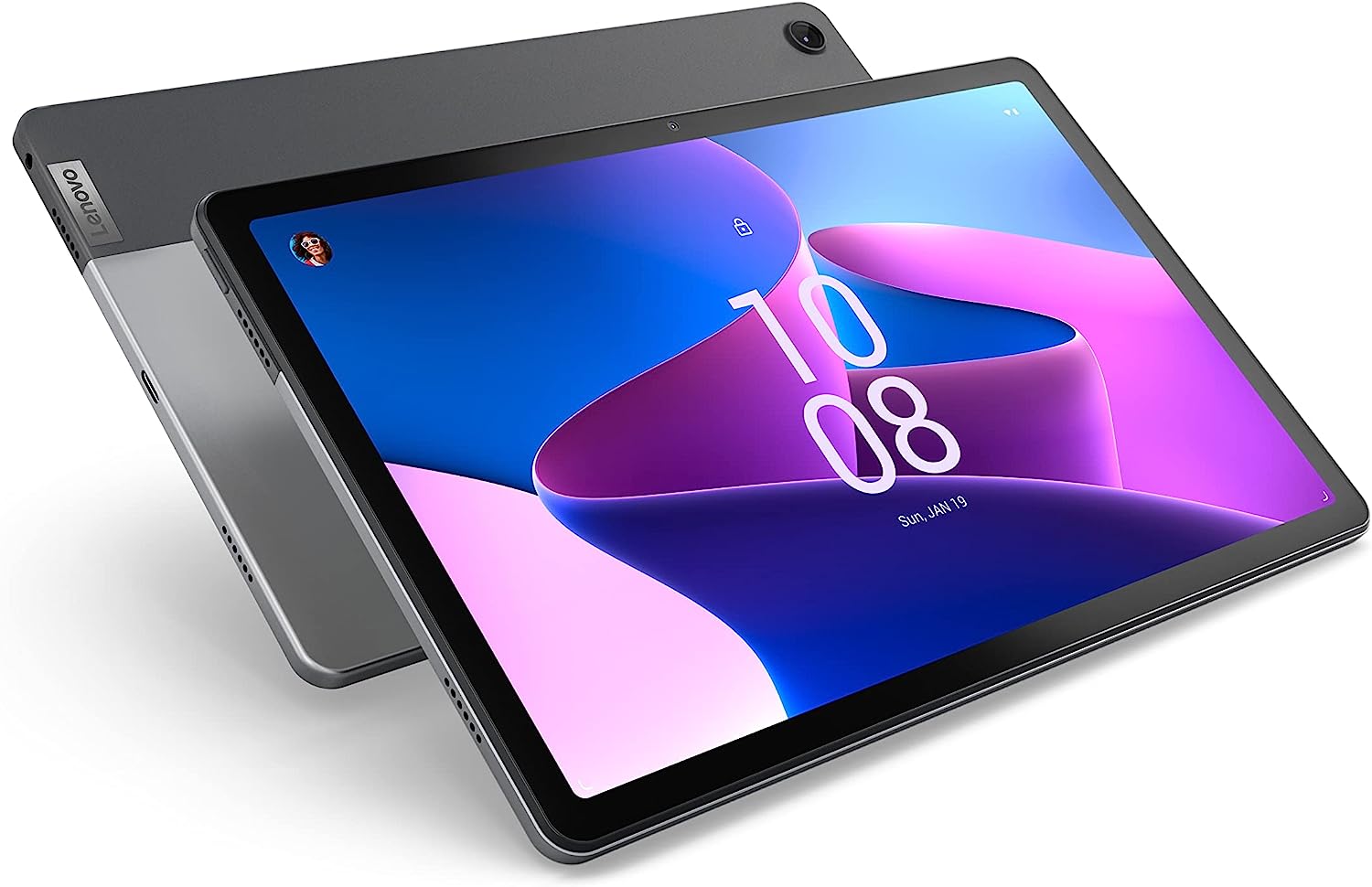 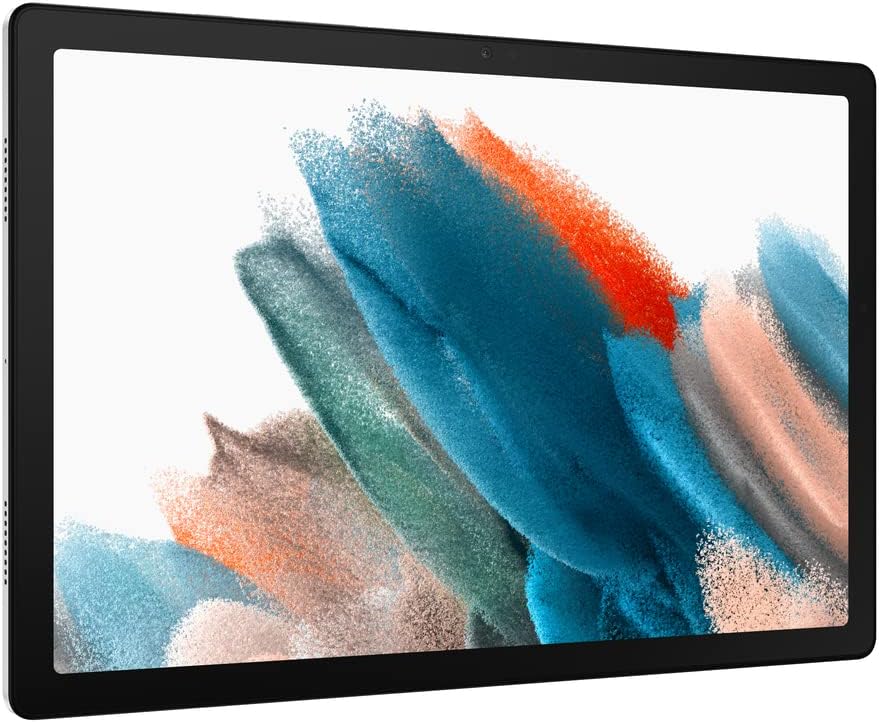 Most of these categories come in pretty close on almost all factors. We would like to say they are quite equal, and it comes down to preference. Do you want a Samsung Tablet or Lenovo Tablet? Samsung Galaxy Tab A8 is a great budget tablet, and it’s listed as #1 in the list of best tablets under $300 list.

Both of these tablets are great budget devices that can handle the basic things you would expect from a tablet.

Other Aspects Of The Lenovo Tab M10 Plus

The Lenovo Tab M10 Plus, in our opinion, is the best mid-range tablet money can buy in 2022. It nails all the boxes of what you can expect from a tablet in this range and then goes above and beyond with its excellent battery life and great display. The fact that it includes stylus support as compared ort its direct competitor, Samsung Galaxy Tab A8, takes it up a notch as well.

Overall, I am very happy with my decision to pick this tablet up.

It fulfills all my media consumption needs while also providing me with enough performance headroom to get some light work done as well.