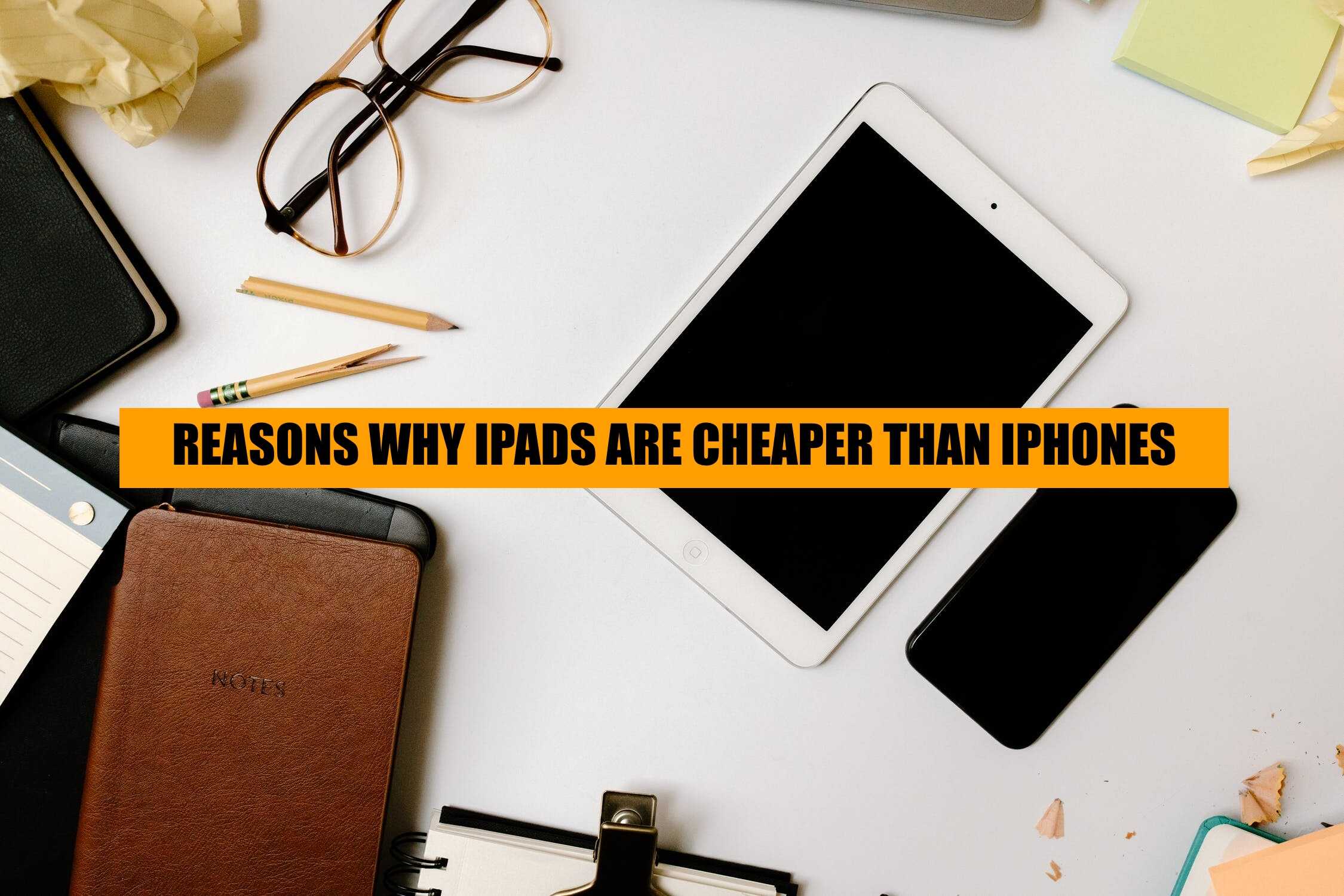 Contents hide
1. Supply And Demand
2. Greater Range Of Connectivity
3. Miniaturization Costs Money!
4. R&D Costs A Ton!
What Can an iPhone do that iPad Can’t?
What Does The iPhone Do Better Than The iPad?
FAQ

With the introduction of the iPad in 2012, fanatics at that point flocked to stores considering the large tablet as an alternative to the iPhone. However, with the bifurcation now more apparent than ever, why does the iPhone still seem to carry a higher price point than the iPad?

After all, you gain access to a much bigger display, the same internals (almost), and better battery life. If that’s the case, then why is the smaller iPhone priced higher?

Rising demand, added cost of miniaturization, having more features, and gaining access to the newer ones first are some of the reasons why the iPhone is more expensive. However, with the advent of proprietary technology on the iPad, we’re not sure how long that may last.

Let’s face it, ladies and gentlemen, supply and demand is a real thing. And, that metric while solely not responsible for a price of a product, plays a huge role in the pricing of a product. In essence, if a larger group of people demand a product that has a limited perishable supply, prices are bound to go up.

While the world won’t be running out of iPhones anytime soon, there’s a significantly higher demand for iPhones than iPads. In fact, Apple has often cut down on the production of its iPads to make up for the demand for iPhones.

This sends us a clear message. While Apple is certainly determined to sell iPads, they are more than ready to compensate for lack of production by reducing their focus on concocting iPads whenever the iPhone is at stake.

iPhones come with a greater range of connectivity options as compared to an iPad. Think about it, even the latest and greatest iPads do have cellular connectivity but still do not support voice calls and messaging. While it can be implemented, most of that tech is kept for the iPhone.

So, with a greater focus on ensuring that connectivity is not lost no matter what and that signal strength is maintained so that calls can be made even when it seems unlikely. Therefore, Apple’s focus on always implementing the latest and greatest when it comes to 3G, 4G, and now 5G leads to an escalating cost.

Plus, supporting all those cellular bands and having multiple antennas leads to hefty licensing fees, which also drive up the cost of the iPhone.

While still doable, reducing the scale of a product while keeping the same requirements is expensive. For the iPhone, fitting in the powerful A-series chips, a decently sized battery, a camera module, all the modems, water insulation, speakers, haptic engine, and a USB port into such a tiny package is an engineering marvel of its own.

So, yes folks, size does matter…

For the iPad, while still complex, there is a lot of space to play around with. So, squeezing every component into one tightly packed space doesn’t turn out to be a necessity for the larger tablet but an absolute must for the much smaller iPhones.

While the recent iPad Pros have brought in a few new features like ProMotion that were introduced on the tablet first, generally, the iPhone gets the latest feature before the iPad. When creating a new feature or service, a lot of money is poured into research and development.

Once the product is finally developed, it is only a matter of fitting in that feature and developing an affordable means to mass-produce it. Since the iPhone usually gets the newer feature first, a premium is placed on its exclusivity. This is to make up for the amount invested in R&D alongside establishing a sense of prestige.

As mentioned earlier, we are seeing a paradigm shift in how Apple fundamentally rolls out new features with the company now testing out various new shticks with different product lines. But, the iPhone still remains the defacto standard when it comes to purchasing the latest and greatest in hardware and software from Apple.

What Can an iPhone do that iPad Can’t?

While the gap has been closing down ever so slightly, there still are a few fundamental differences that differentiate the iPad and iPhone from one another apart from their screen size. Apple keeps a few features reserved for the iPhone to make up for the more expensive cost.

Quite obviously, the phone call and messaging part seem to be reserved for just the iPhone for the foreseeable future.

If you have ever used Instagram on an iPad, you’ll know exactly what we mean. Since a larger audience uses an iPhone, there is a greater incentive for developers to create stunning, responsive applications for the platform. So, the iPad is often ignored or receives scaled-up iPhone applications instead.

What Does The iPhone Do Better Than The iPad?

Besides just having a greater array of features, there are a few intersecting ones that the iPhone just does plain better. Here’s a look at all of them:

Let’s face it, the iPad Pro series has definitely caught up to the iPhone in terms of camera quality. But…we aren’t quite there just yet. The newer generations of iPhones support features such as cinematic ProRes and a greater array of cameras as compared to their elder cousin.

All in all, the iPhone has always been the better shooter in terms of overall picture quality, resolution, fidelity, and accuracy. And, it seems like that’ll remain a common trope for the foreseeable future.

Before you come at us with a pitchfork because of the iPad Pro 12.9 inch’s Mini LED display, there are still a lot of gimmicks that need to be ironed out with that technology. And generally, Apple introduces the latest and greatest in display tech with the iPhone.

Just like the display, every major design overhaul in Apple’s ecosystem is spearheaded first by the iPhone. For example, the tradition of smaller bezels was first portrayed by the iPhone X and was then eventually carried on over to the iPad lineup.

Moreover, the company’s recent transition to a more rounded design has also been first experimented on with the iPhone 12 and 12 Pro and then subsequently lead to the inspiration of the newer iPad Pro’s and the Macbook M1 Pro / Max series.

Can I Use My iPad as iPhone?

No, you cannot use your iPad as an iPhone and receive calls / text messages. However, if you do have a functioning iPhone nearby that is connected to the same iCloud account, you can have all your calls and messages routed directly to your phone.

Does iPad Have Better Battery Life Than iPhone?

Yes, iPads tend to have a much better battery life than iPhones. This is because they are much larger so they can house a bigger battery. Moreover, they tend to not be used extensively outdoors and are primarily kept at lower temperatures, alongside not having the need to constantly search for cellular signals.