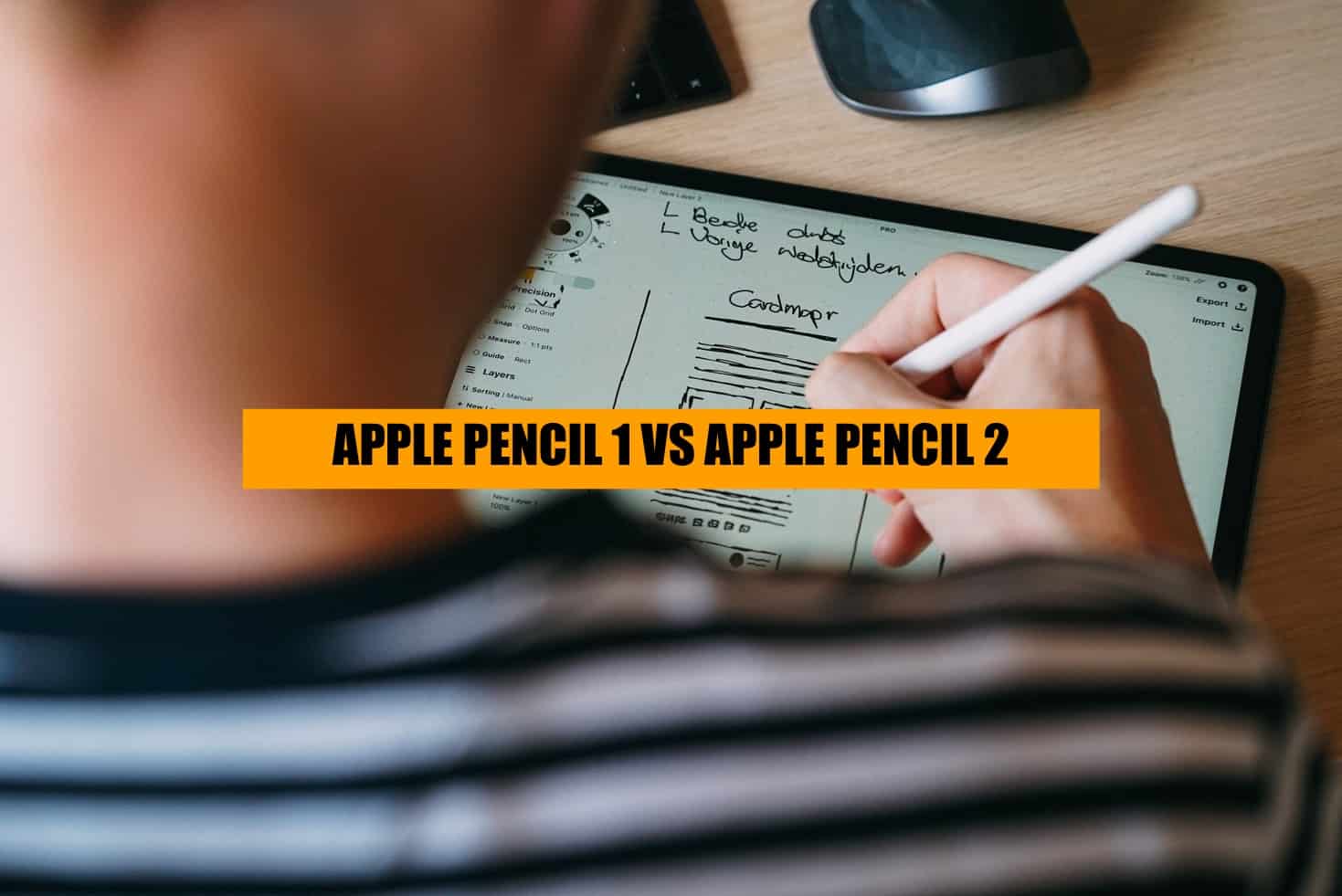 apple pencil tips and tricksBoth of the Pencils differ quite a bit in the overall built. While the Apple Pencil 1 is circular, the Apple Pencil 2 has a flat edge, resembling more like a wooden pencil. Apart from that, the availability of magnetic caps that aid wireless charging and flexible storage puts the successors(2nd Apple Pencil) on a list separate from the predecessor.

iPad owners often find themselves struggling with the question Apple Pencil 1 or Apple Pencil 2? Both of the pencils have exceptional built qualities. They are among the best available options, especially when it is about dealing with digital sketching and note-taking, which troubles users with the decision-making process.

So what would be the best choice, 2015 released Apple Pencil (which is still available) or the Apple Pencil 2 that came out in 2018? Luckily, there are crucial elements that distinguish one from the other. Read along and make the most efficient decision as we uncover the main differences between the two Apple styluses. 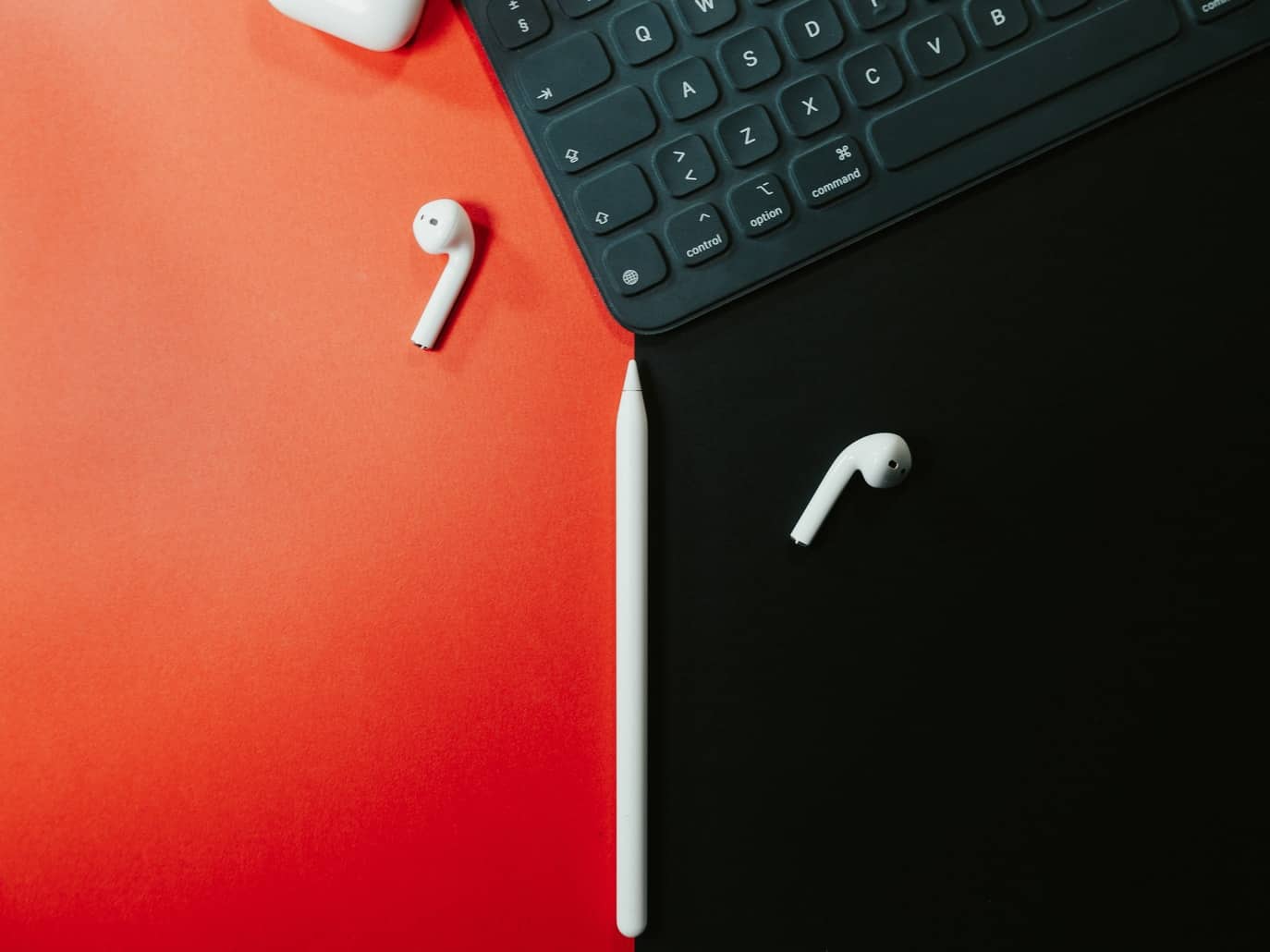 Let’s start by checking to what extent these two Apple Pencils differ when we put their respective designs under the trial. Being 8.9 mm thick, both the Pencil look pretty similar; however, the second-gen stylus features a flag edge while the same is circular in the former.

The first-generation Apple Pencil shelters a lustrous plastic finish. On the contrary, Apple Pencil 2 feels more like a usual wooden pencil thanks to the matte finish that runs all over.

Offering a flat-edge build, the Apple Pencil 2 straight away resolves the rolling-down-the-slope issue that some first-generation Apple Pencil users had to complain about. Apart from that, both can be listed among the good-for-ergonomics styluses.

Weighing 20.7g and scaling to 8.9 mm in diameter, you’ll have a good experience using any of the styluses, even for long periods. The overall built is so well executed from grip to thickness that using Apple Pencil and Apple Pencil 2 feels like any other pencil we write on paper.

The tip of both the Apple Pencils is indistinguishable in many ways. Whether you consider the Apple Pencil 1 or the Apple Pencil 2, the tip in each case is fairly hard. In other words, either of the styluses taps firmly on the iPad’s screen. The hard-built of the tip also corresponds to its durable nature.

However, an interesting factor distinguishes the first-generation Apple Pencil from the second-gen ones, even when the “tip” is considered. The Apple Pencil 1 comes with a replacement tip inside the box, while sadly, the same doesn’t happen for Apple Pencil 2. Although you need to spend just around $20 to grab a pack of 4, the approach feels a bit cheap from Apple’s end.

Storage is one section where the second-generation Apple Pencil seems to own an edge over its predecessor. Considering the fact that Apple Pencil 2 magnetically gets attached to the iPad Pro, it is obvious to find it more promising. At the same time, Apple Pencil 1 is deprived of any storage solution, at least from the official end.

I insisted on the term official because there are covers capable of attaching the first-gen Apple Pencil. Also, there exist iPad sleeves that let users store their styluses. Although unofficial, indeed a storage solution nonetheless.

In case you don’t know, the term pressure sensitivity signifies the extent to which a stylus is capable of responding to the pressure applied. In simple words, it is the ability of any stylus to decide how thick or thin the lines are to be drawn on the basis of the force applied to it.

Tilt Sensitivity, on the other hand, refers to a stylus’s capability of perceiving the angle over the surface being operated on. Simply, it is the mastery of determining tilt angles. Now that you have a good idea about pressure and tilt sensitivity, let’s uncover if these factors differ in Apple Pencil 1 and Apple Pencil 2.

No matter if you’re after showcasing your artistic ability or willing to sketch some regular pieces of stuff on a daily basis, both Pencils will assist in every possible manner. Talking about numbers, we’re well aware of the fact that Apple doesn’t believe in revealing any of those, and the scenes are no different with its styluses.

However, if you ask me to guess the pressure sensitivity values of Apple Pencil 1 and Apple Pencil 2 considering the performance they come up with, it would be safe to say that they are as good as the other premium styluses available today. Even modern-day professional digital artists have similar beliefs.

Similar to pressure sensitivity, tilt sensitivity is flawless in both the first-generation and the second generation Apple Pencils. Again, we don’t know the numbers, but neither of them is falling short of providing the premium range of performance. 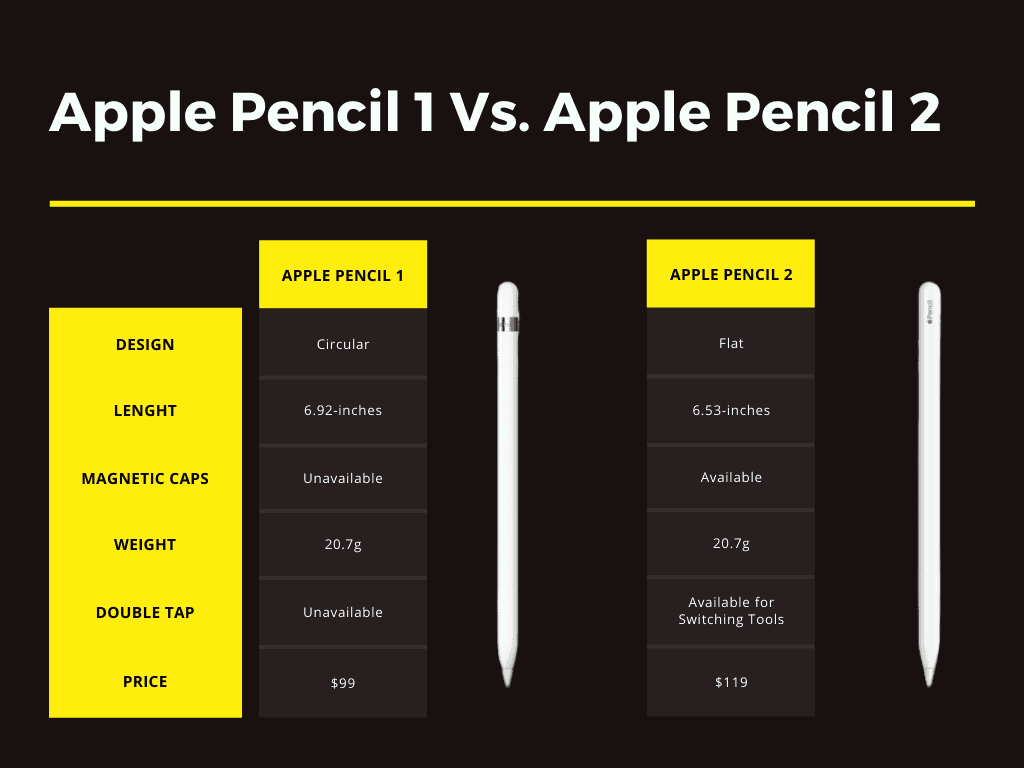 Among the things that mark the generation switch between Apple Pencils, the support for the movement and quick switches is worth mentioning. The Apple Pencil 2 features double-tap functionality, one you’ll not find with the original Apple Pencil. What this feature does is help users swap between different tools, simply tapping the stylus twice.

The same feature can be employed in many situations that include taking notes, operating programs such as Adobe Photoshop, and more. You can also use the double-tap feature in audio editing software, like linking a series of actions together. The possibilities are endless, however, exclusive for the users of the second-generation Apple Pencil.

The storage factor, to some extent, reflects how the Apple Pencil 2 outruns the first-generation Apple Pencil in the charging department. The magnetic nature that I’ve discussed in the previous section not only helps store the stylus but also allows wireless charging. To put it in simple words, the Apple Pencil 2 by aiding reach and lessening friction tops in the usability section.

The story gets a bit annoying for the original Apple Pencil. With the first-gen stylus, you only get to employ the traditional form of charging. It is fine, to be honest until you are diligent about plugging it on a regular basis, but the same can get really pesky else-wise. Luckily, it charges quick enough to counter the pain a bit.

Discussing the battery performances and the related aspects in detail is not something usual with Apple; surprisingly, it did mention that the Apple Pencil 1 would last at least 12 hours. After running multiple tests by myself, it wouldn’t be wrong to say that this device is indeed capable of holding its charge.

The same goes for the second-generation Apple Pencil as well. Once fully charged, I had no problem using this for prolonged drawing/note-taking sessions. Apple does deserve a token of appreciation for being capable of maintaining good traits in common between two styluses that differ quite a bit across the board.

Both the first-generation and the second-generation Apple Pencils are compatible with Apple verified note-taking, sketching, and editing apps.

A jump in generations was made clear right when the Apple Pencil 2 was named. For that matter of fact, anticipating a price hike is pretty evident. The original Apple Pencil costs $99. The number sees a 30% increment as the second-generation Apple Pencil is available for $129.

How do you know if Apple Pencil is charging/charged or not?

To charge your Apple Pencil 1, all that you’ll need to do is plug it in directly to the Lightning connector onto the Pad. Alternatively, you can use the Apple Pencil charging adapter that comes inside the box. Once you plug in the connections, charging should initiate right away; however, you can confirm it by following the steps below. It will also help you check if the Apple Pencil is completely charged.

As soon as you attach the second-generation Apple Pencil to your iPad, the charging status gets displayed on the screen for a moment. Now to check how much charge your Apple Pencil is left with or is it entirely charged, simply check the Today View feature on your iPad. Doing it is pretty straightforward. Just swipe from the left end to the right on the Home screen or your Lock screen.

What Apple Pencil works with Procreate?

Procreate app supports both generation Apple Pencils (1st gen & 2nd gen). If your pencil is paired with your iPad you shouldn’t have any issues using it with the app. There are no extra steps to take.

What other tablets are compatible with Apple Pencil?

The Apple Pencil strictly functions with iPads only. The build is such that it requires a special set of hardware that won’t connect otherwise. If you’re looking for a stylus that works with all the iPads and other tablets we suggest looking at some alternative stylus.

Can I use Apple Pencil with iPhone?

As already mentioned, Apple Pencils are designed to work with specific hardware sets that are found in iPads. Having said that, it is not possible to use an Apple Pencil with any model of iPhone that is available to date or any other smartphone.

Will a Samsung Stylus work on an iPad?

In our objective opinion, they are very similar and it all comes down to compatibility, but we would recommend getting the 2nd gen Pen, just for compatibility reasons, in case you change/switch your iPad to a newer version there’s a bigger chance that it will be compatible with the new device.

Of course, the charging is better & the double-tap feature helps as well. And after doing some note-taking the 2nd gen pencil just felt much better adjusted for your plan from an ergonomic perspective.